And he considers himself super lucky to be where he is now – with friends who love him and accept him for who he is.

Gets him all verklempt, especially when he thinks about where he was.

A baby Quincy has been spotted alongside baby sister Agatha!

Just some quick Quincy Appleby lore – he has no idea who his parents are.  In fact, he doesn’t even really know where he came from or what he is.  He sort of just appeared one day in a park with Agatha when they were about 6 and 3 (this flashback takes place about a year after that, so they’d be 7 and 4 here).  All they had were a couple of beat up suitcases and their names.

They did bounce around the foster care system for a good while – people tend to get a little freaked out with a couple of masked kids with claws.  They were eventually taken in by their adoptive parents, the Applebys, who I picture as kind of an Addams Family couple, cheery and grim at the same time.  But for a long while, it was just Quincy and Agatha.

And now I’ve made myself sad.

I know what you’re thinking.

And I agree!  “Jamboree” and “haberdashery” are two wonderfully underutilized words.

I know you’re also probably thinking things like, “Drew, what the hell is this?” and “What ARE those things coming off of Bopfenmuth’s body?” and “Is Puffkyth okay?”  Really don’t have clear answers for the first two, but I can honestly say that yes, Puffkyth is doing just fine.

Or maybe he isn’t.  It’s hard to tell his “I’m doing just fine” face from his “gazing into the abyss and being overwhelmed by the world’s sorrows into a state of catatonia” face.

Based off of rewatching an old Disney show with friends that was waaaay more trippy/terrifying than any of us remembered.

Also that is supposed to be grass on the DVD background, I swear Ezekiel did not set anything on fire. 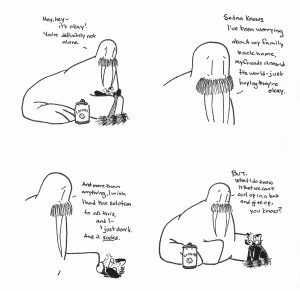 Really trying to adopt this motto into my own life.

I mean, there isn’t more that we can do except live one day at a time, right?  Doesn’t do any good trying to live too far in the future.

This is admittedly easier said than done, especially for someone like me, whose anxiety just LOVES to focus on things days/weeks/months/years down the line, taking me completely out of the present.

But like Lars says, it’s worth a try, right?  Better to try than not at all.

Here’s to the present. 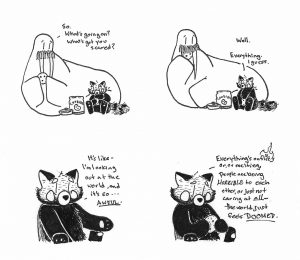 This right here is probably the core of my own anxiety: lack of control.  Unable to do anything but watch everything spin wildly and wishing I could reach out and fix it.

I would like to follow this by saying: I am fine.  In this moment, I’m good.  But I have had moments like this.  And there is a heckuva lot going on in the world right now that’s got people scared.

I’d also think that this anxiousness is definitely a new emotion for Eliza.  Feeling worried, scared, and powerless all at the same time.  Just not knowing what to do.  Hoping that somebody has the answer. 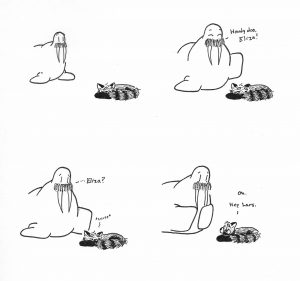 If Eliza’s feeling off, you know there’s a problem.

What a time for everyone to show their colors off!

Don’t worry, Dot.  Pretty sure that the cicadas are all starting to die out, judging by the massive pile of dead bugs on our porch.  And they have gotten quieter – haven’t been hearing that low alien drone as much recently.  So it might be the start of the end.

Is it weird that I’m gonna kind of miss them?  I dunno.  Circle of life, I suppose.

I need to actually map out where everything is in this universe.

Not everyone lives in the immediate neighborhood – Cleo and most of the Paw Pioneers, for example.  And the mermaids, of course.  Unless they had a saltwater swimming pool.

Also pretty sure the Seasons live somewhere else, but they just like to hang around.  Especially Spring and Summer.