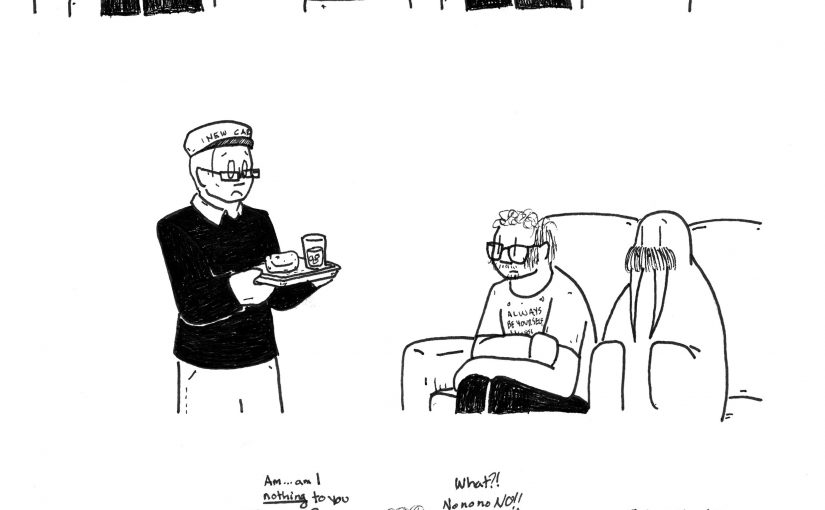 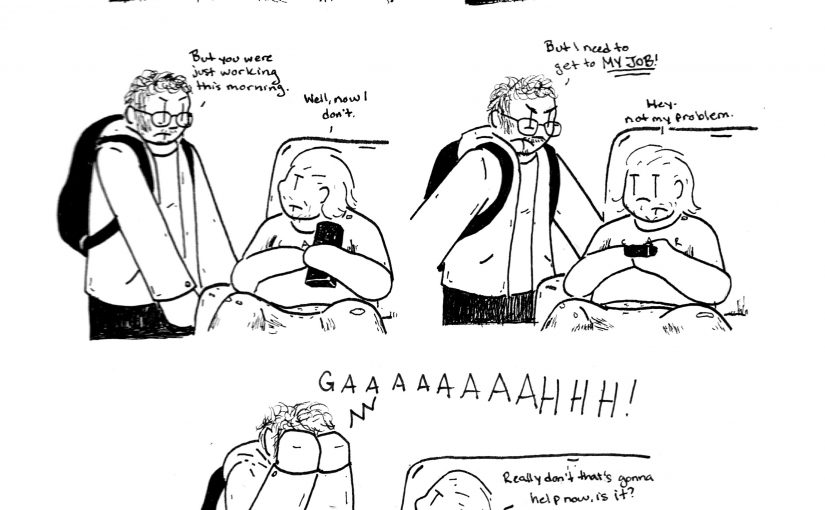 What?  No, I didn’t draw my car as a person because I can’t draw cars.  Where would you ever get that idea from?

But yes.  My car has become nothing more than one huge headache.  I’m just done with it at this point.  It gets me to one spot, then decides to not turn on at all, then magically works again, then dies again.  The radio’s gotten spotty, the CD player likes to eat my CDs, there’s that stupid clicking sound, the lights won’t stop flickering – it’s a mess.  A bloody, bloody mess.  And I frankly don’t trust it anymore.

So it’s been decided: I need to get a new car, pronto.  Hopefully this weekend.  We’ll see.  Do I have any idea what I’m doing?  No, of course not.  But it needs to happen.

I am just so ready to send this car off to the junk heap, I can’t even begin to tell you. 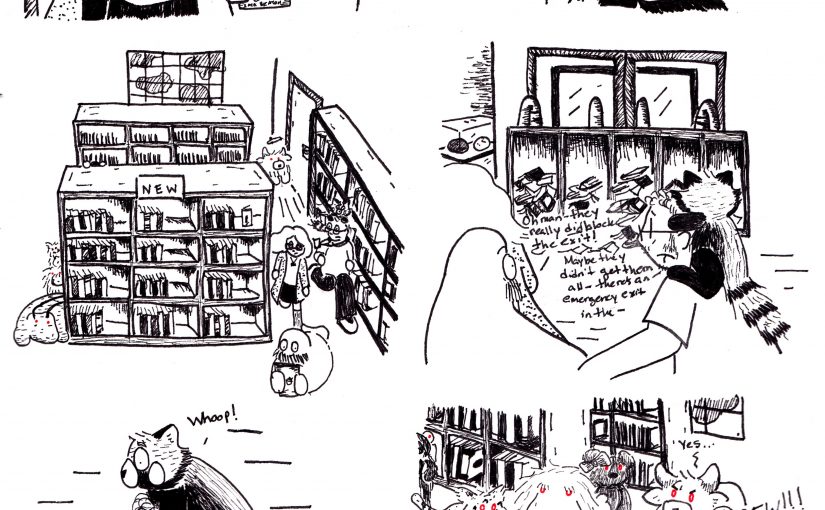 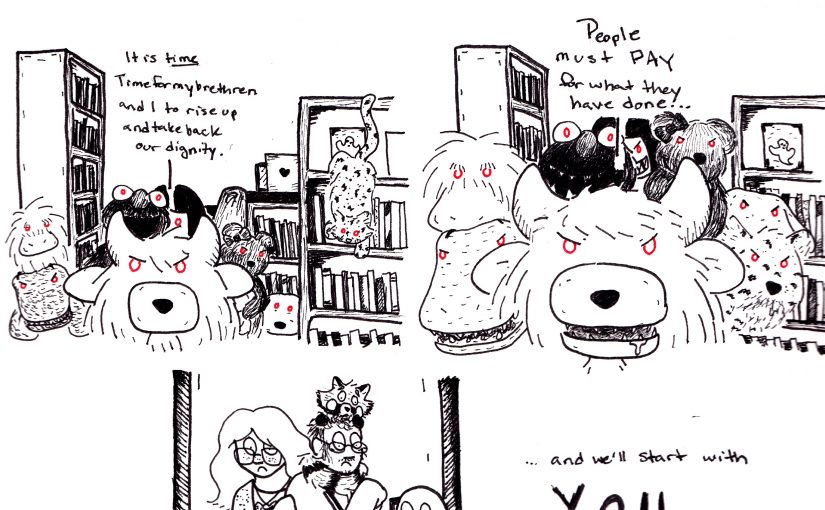 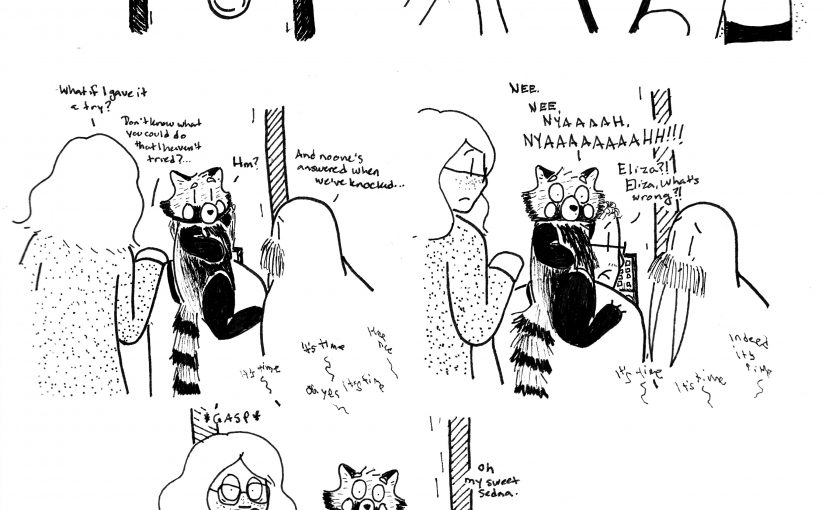 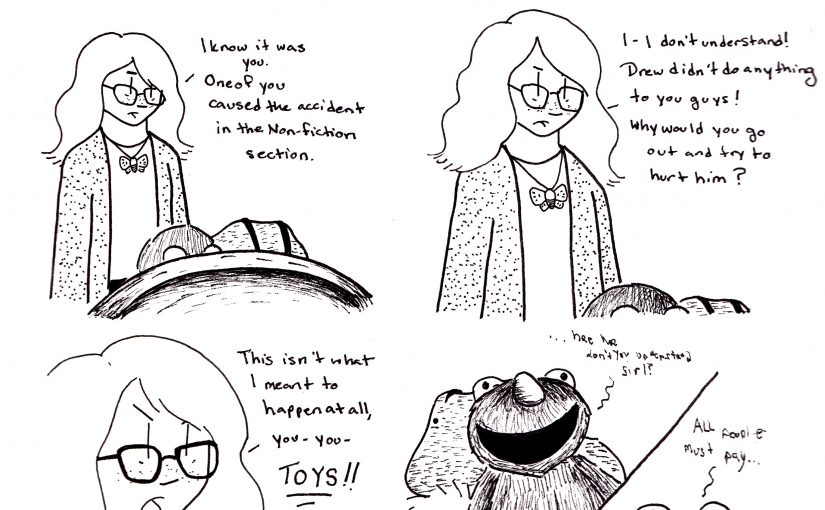 And you thought Elmo on Monday was terrifying.  There’s a reason I almost called today’s comic “Hellmo.”

Seriously, though, I did not not mean for Elmo to come out this creepy.  Yeesh. 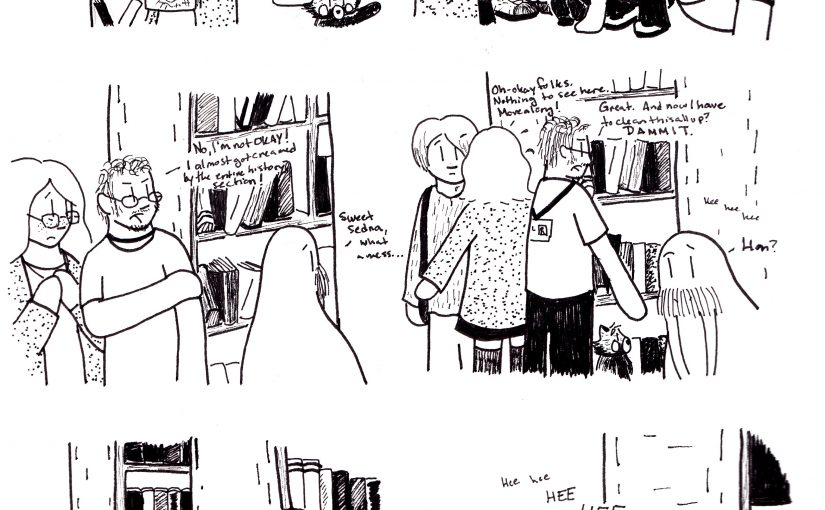 Yes folks, that would probably be my first reaction after narrowly avoiding being clobbered by books.  Because someone would have to do it. 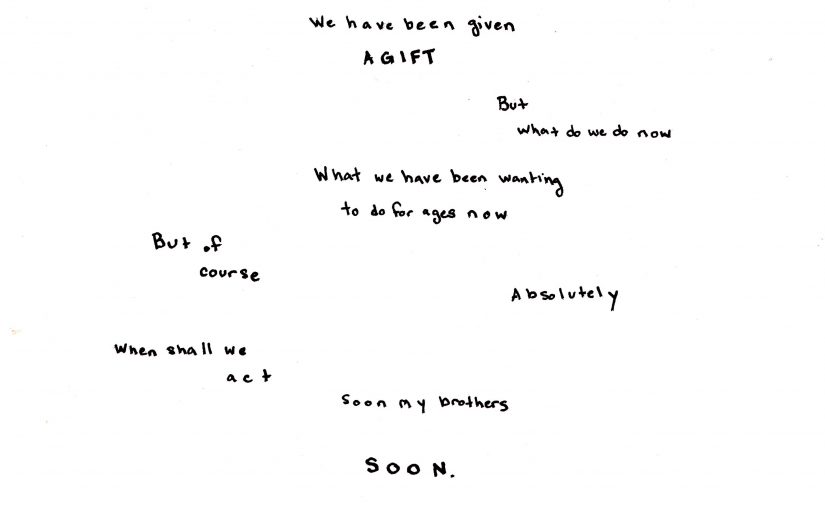 It’s that time of year again.

That time of year when the air grows cold, the leaves change colors, and the stores are decorated with black and orange, announcing Halloween’s arrival.

So why shouldn’t I join in on the fun?  Add to the festivities, so to speak?

Yes, folks, another Halloween story is coming your way.  One filled with frights, curses, and some very angry stuffed animals. 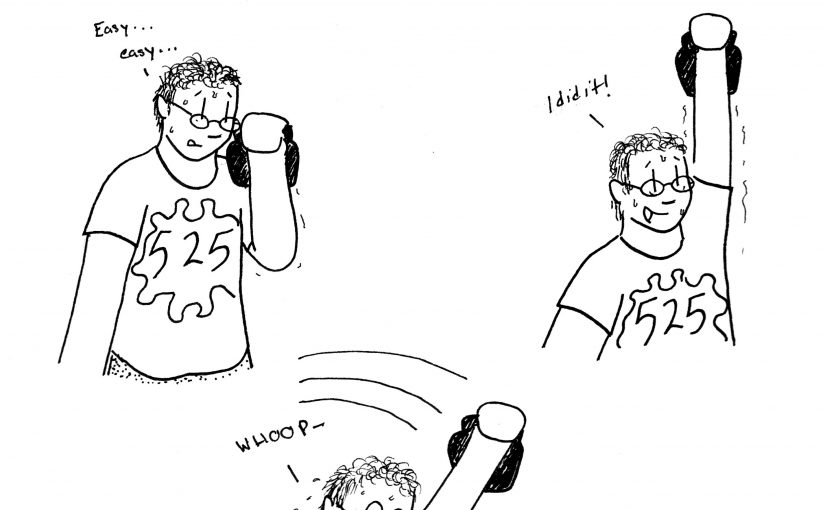 Let’s just get this out of the way: I hate you.

Why is it that in a gym full of large, intimidating machines that look like they could cause some serious damage to my person, that you, essentially a fancy metal ball with a handle on it, are the most awkward, rage inducing piece of equipment there?

Maybe it’s that stupid way you manage to throw me off balance every time I attempt to use you.  Perhaps that’s the point, and you’re supposed to force me to keep my balance, but you don’t see the barbells doing that, do you?  Noooo, they actually like to make sure that I don’t end up feeling like I’m about to topple over.

Maybe it’s your shape.  Your bulbous body never wants to cooperate, and I’m terrified that I’m going to end up bludgeoning myself if your handle slips or you swing in just the wrong way.

Maybe it’s the fact that you just don’t feel good.  Sounds weird, I know, but it’s true.  I can’t get comfortable trying to use you.  Not just because you’re heavy – or seem heavier than a barbell, even though you might be the same weight – but because I can’t find the right way to hold you.  Even with that handle of yours, I can’t seem to make you and me work.

Or maybe you’ve got the unfortunate roll of the dice in that all the excercises that my trainer makes me do with you are extremely awkward.  Like squats, otherwise known as That Exercise I Refuse to Do Alone Because They Look Stupid.  Or attempting to roll a deadlift, a squat, and a press all together.  But you don’t help.  You don’t help at all when you slam into my arm or dig into my shoulder.

This could be entirely my fault, though.  Maybe I’m too lazy.  Maybe I’d rather be doing something else at the gym and I haven’t gotten to know you better, to feel you out and see if I actually make you work for me and my physical wellbeing.  Maybe we just got off on the wrong foot that very first time I picked you up.

In the mean time, yes, I will use you whenever my trainer – who swears by you and seems to think you’ll cure everything in life – wants me to.  And maybe in the future, we could be friends.

Until then, though, you can kindly sod off. 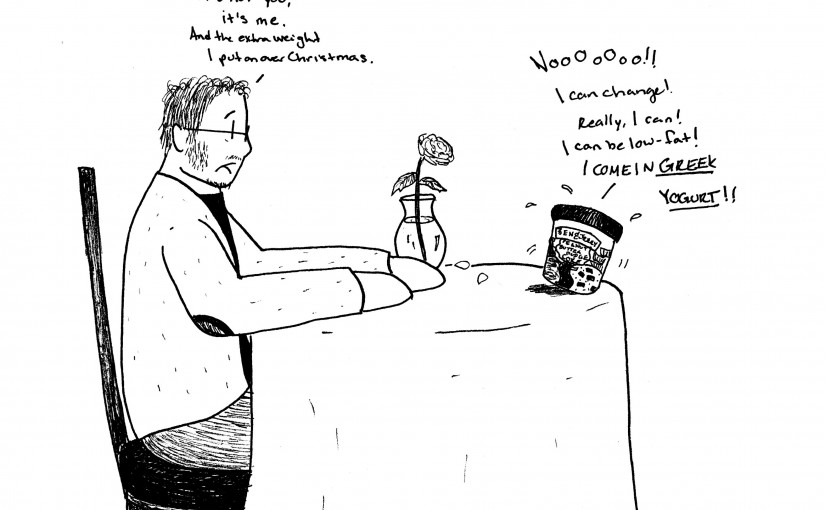 Is this one of the most cliche New Year’s Resolutions out there?  Yes.  Does it still ring very much true for me, though?  Absolutely.

Not gonna lie, I’ve always been a big guy.  Even as a child I was always the chunky one, the last one to finish up the mile run a good 5 minutes after everyone else, the one who, in 4th grade, was actually taken out of class by the gym teacher to get some extra help (only now do I realize how humiliating that is.  Ignorance is bliss, you know).

My weight didn’t actually start to bother until about high school, to be honest.  It was then that I started to think, “Wow, I don’t like being ‘the fat one'” – even though a grand total of nobody called me “the fat one,” at least to my face.  But even then, I didn’t really do much about it.  Maybe it’s my sheer lack of athleticism, or my lack of enthusiasm for all things sporty, or the fact that I can be incredibly lazy.  Or all three.  Point is, my weight bothered me, and I did nothing about it.  I’d always been the kid who hated Physical Education, who was annoyed by all the other kids actually being good at it and treating it like a freaking competition, and yet never did anything to improve myself in that category.

Then college came around, and suddenly, wham.  Instead of gaining that infamous Freshman 15, I lost about 40 pounds over the course of a year.  I blame the student meal plans and the fact that I had to walk everywhere for that startling feat.  Actually had to get new jeans because they were constantly sliding down (and were covered in paint).  Problem was, my weight kept yo-yoing all through college.  I’d go home, and gain about 10 pounds over the summer, then go back to school, and proceed to lose them again.

Since I graduated, I have managed to gain all that lovely weight back – and then some.  Trust me when I say that it’s not necessarily fun to hop on the scale and be like, oh, hello new pound.  Where did you come from?  Because it’s not like my self-esteem/confidence could be any lower, right?  Fun.

So, this year, one of the things that I hope to accomplish is to actually lose some weight, and hopefully keep it off for a period of time.  This means, though, that I need to start adding some physical activity to my life.  I thought that working at the library would be enough.  Apparently not.  I need to start running again (remember that comic?  Yeah, haven’t run since.  Oy).  Or even picking up a gym membership.  That, though, might have to wait a couple of months.  You know, until everyone else has given up and the gyms aren’t nearly as crowded.

This also means having to be careful about what I’m putting inside my body.  Which means having to cut a few things out of my diet.  No more chips.  No more soda.  And *SIIIIIIIIIGH* no more ice cream, perhaps my biggest vice of all.  Or at least cut back on it.  Currently don’t have any in my freezer at the moment, which has really helped thus far, in ridding me of temptation.  Have to carry this forth, so no more weekly trips to Giant to grab a couple of a pints of Ben and Jerry’s, and maybe a packet of combos, and some gummy worms, and so on and so forth, you get the gist.

I need to make this happen.  This has been a battle for a while now, and as I get into my mid-twenties it’s going to get harder, so I’m really going to have to make some kind of effort.  Is it going to happen all at once?  No, probably not.  That’d be extremely unhealthy and maybe a sign of some horrible disease.  But I’ve got all year to make this work.

So, let’s do this.  Here’s to 2016, and here’s to me attempting to make myself a lot healthier and feeling better about me in general.