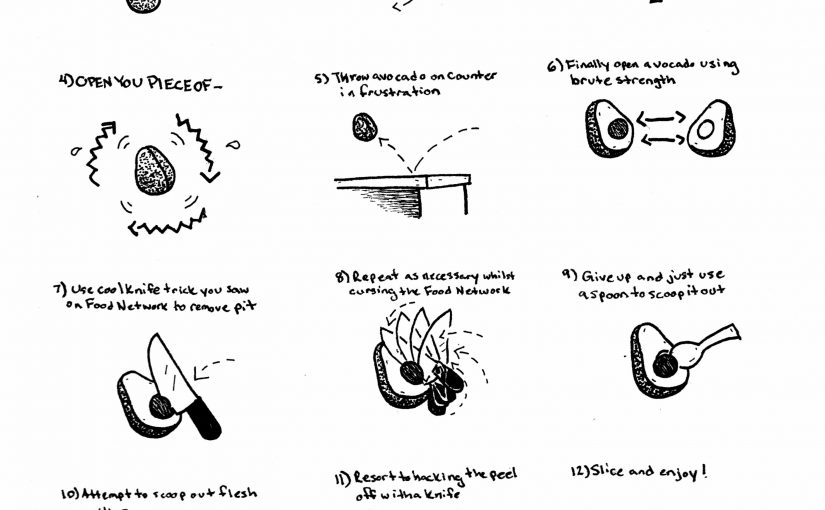 Yeah, not the biggest fan of avocado.  It feels like you’re biting into a candle and kinda tastes like grass clippings mixed with soap.  Or maybe it was just the ones we bought.  Either way, it is one high maintenance fruit-vegetable.

Guacamole, on the other hand, I can roll with.  Just as long as someone else prepares.  Because clearly I’m doing something wrong. 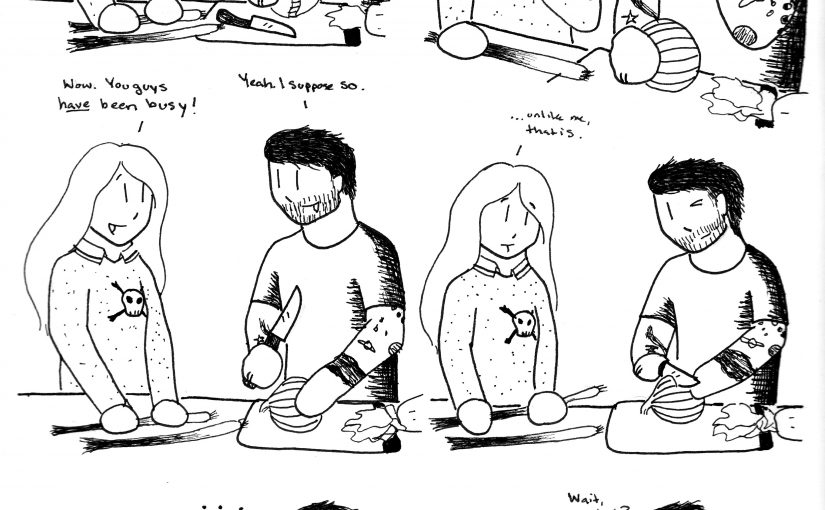 Where’s this all going?

Also, wishing you all a Happy Independence Day!  Go out there and feel patriotic, I suppose.  Have a cook out, watch some fireworks, and maybe pop in the movie Independence Day.  Because is there really any other better movie to see today?

And don’t say the sequel that should have never existed.  Please.

A while ago, I did a comic about attempting to bake with Nutella, and how the cupcakes basically imploded into a big, sticky mess.  Admittedly, I was working without an actual recipe, hence the cupcake horror I unleashed in the oven.

This time, I found a recipe whilst scrolling through YouTube for Nutella cupcakes.  And I thought, well, might as well give it another go then, I suppose?  I needed something to do, or risk yet another day of staring at my ceiling.

So, I did.  First time doing several things that I’ve never done in the kitchen – baking with sour cream, for example, as well as working exclusively with egg whites.  That meant I had to separate the eggs, and for the most part, it was a success.  Got a little bit of yolk in them, but didn’t seem to affect the cupcakes too terribly much.  I’d definitely chalk that up as a win in the kitchen.

Once the cupcakes popped out, they smelled AMAZING.  They looked pretty good, too – they didn’t collapse, or sink in the middle, or overflow the tops (mostly my fault on that one – I have a tendency to overfill the cupcake liners).  I let them cool, whipped together the Nutella buttercream, frosted them, and then proceeded with the most important part of the entire process: tasting them.

They were so GOOD.  They were light and fluffy, with that nice crisp top that I personally enjoy on my cupcakes (don’t know how I achieve that).  The Nutella flavor was that melding of hazelnut and chocolate, with a tangy note in the background from the sour cream.  The buttercream accompanied it quite nicely without being too lumpy.

I was stunned at how well they had turned out.  The past couple of times I made cupcakes, they had only been okay.  A little too crumbly, or too moist.  But these – these turned out perfectly.  To be honest, the best thing I had baked in a while.

If there’s anything I learned from this, it is that you can bake with Nutella.  And also recipes are your friends. 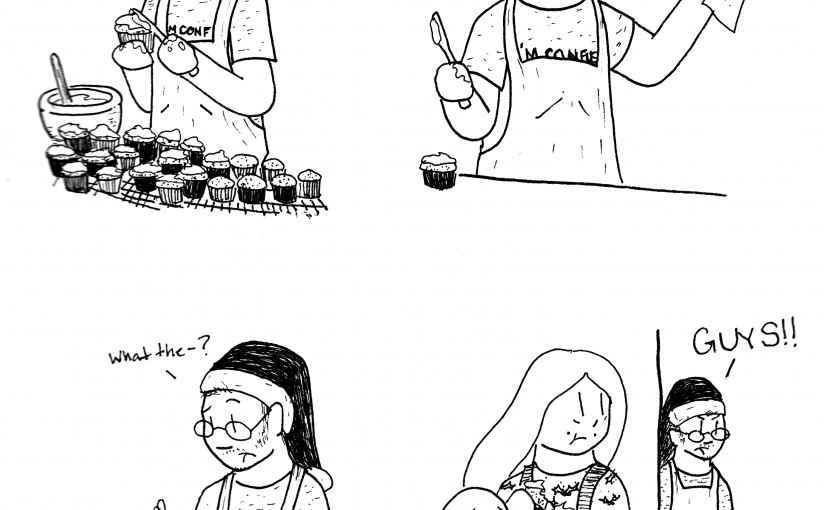 Baked goods never seem to last long in my house.  Case in point: the Sweet Potato Cupcakes I made to kick off the Holiday Baking season, a month long celebration of all things sweet to go with the festivities, as well as a deprivation of most of our baking ingredients.  Turned out nicely enough – maybe a bit too much nutmeg, too much sweet potato, which made them a bit moist, but still tasty.

I made them Friday – a good two and a half dozen, complete with brown sugar cream cheese icing.  It’s Wednesday, and there are 2 left.  Kind of felt like the comic – all the cupcakes have suddenly vanished into the aether (or into people’s stomachs).

Like I said – ’tis the season to be baking.  And eating.  I love this time of year. 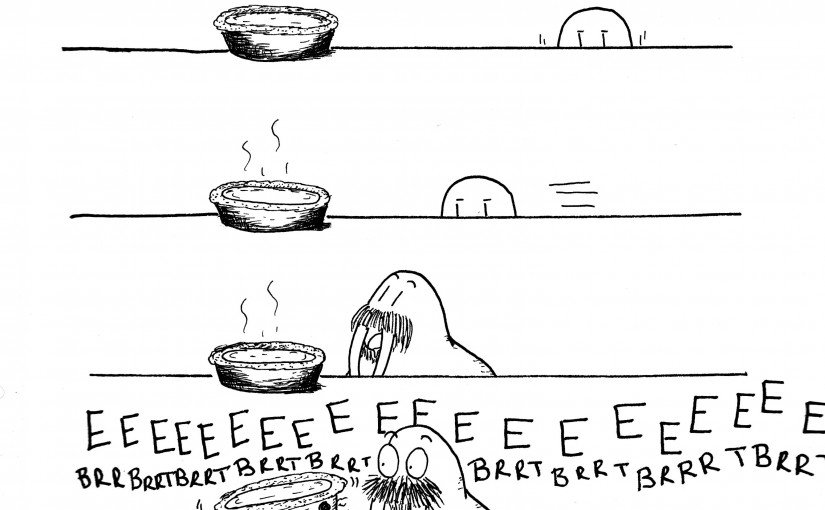 Down to the home stretch, people.  That last few days before Turkey Day.  And some people are gettin’ mighty hungry and attempting to sneak a bite or two.  But really, who could resist a nice big slice of fresh out of the oven pie?  Unless it’s like, I don’t know, Key Lime or something.  I think that’s supposed to served cold.  And so is chocolate pie, I guess.  But who can wait that long for pie?

Side side note: I tried to make my own pie dough once.  Failed miserably.  Have stuck to the pre made crust ever since.

Side side side note: I will be making a chocolate pie for Thanksgiving this year.  Get jealous.

Here we have our walrus friend, whipping up something tasty in the kitchen.  He knows full well that in order to make something truly delicious, you have to make a bit of a mess.

Sidenote: Yes, I did make brownies this week.  And yes, I made a mess.  Not my fault cocoa powder and flour gets literally everywhere. 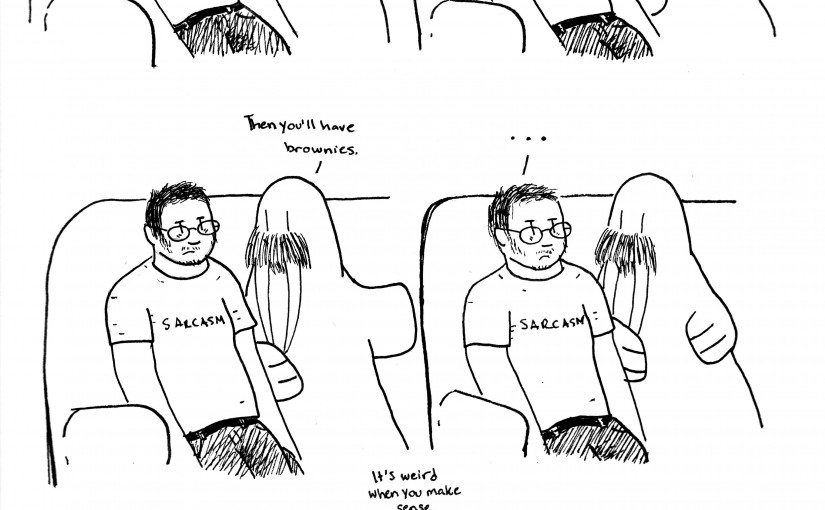 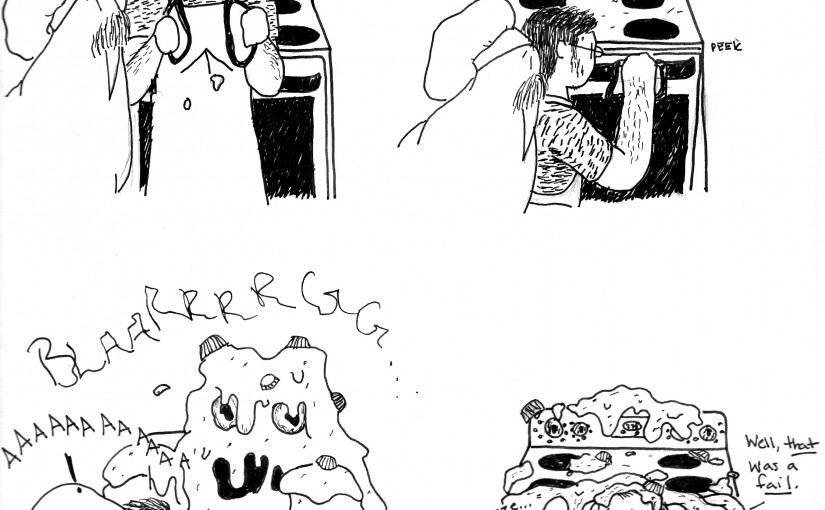 A few notes on baking cupcakes:

2. Baking soda – also very important to baking, obviously.  Be careful how much you add in, or else your cupcakes may just decide to continue to expand until they overflow the pan, turning into a giant, soupy mess.  Again, see picture for details.

3.  Nutella doesn’t lend itself to baking all that well.  That is all.

4. Treat yourself to some Ben and Jerry’s in order to make yourself better about your biggest kitchen disaster yet.  It will help – trust me.

5. Resolve to try again next time.  This time, though, just shoot for some plain ol’ chocolate cupcake and leave out the Nutella.  It doesn’t want to play nice. 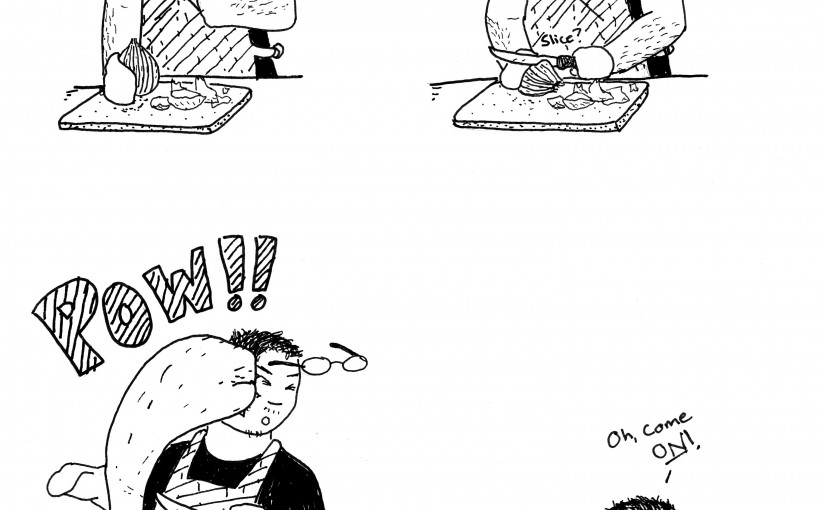 One of my favorite/least favorite things to work with when I’m cooking are onions.  I love the taste of onions, and I think that they are the bacon of the vegetable world in that they improve the flavor of a lot of foods.  In essence, onions are great to cook and eat.

However, I also think that they are a bitch to prepare.  Seriously, every time I have to chop up an onion, like yesterday when I was making lasagna, it’s like “Alright, this isn’t too baaaahhhhMY EYES MY EYES THEY BURNNNNNN.”  So, I’m standing there, trying to finish cutting them as quickly as possible while my eyes are stinging and watering like crazy, flailing around – it’s a sight to behold.  There is a reason why onions are always the first thing I try to get done when I’m prepping for a dish, just so I don’t have to deal with them later.  Once that’s out of the way, it’s smooth sailing from there.

There’s got to be an easier way to chop these things, right?  Please, let me know if there is one.  Because, I mean – oy.  For a vegetable, they hurt.