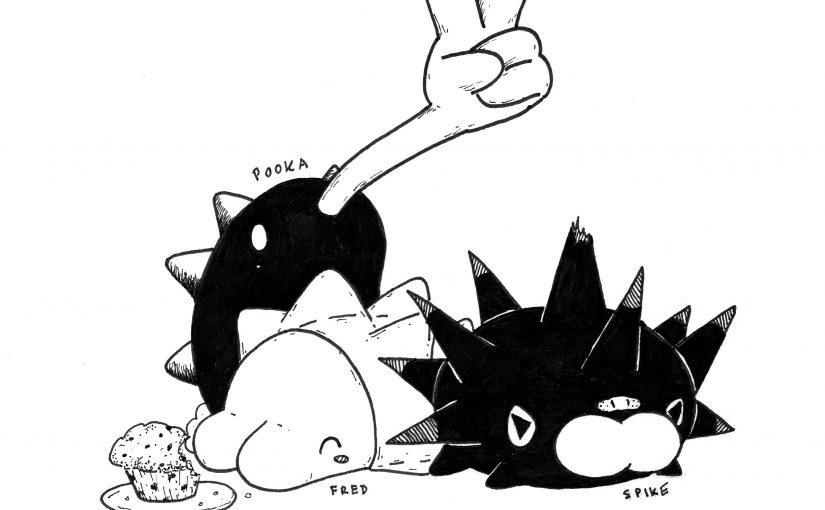 Sorry about the brief break.  A delightful mix of overthinking things/lack of ideas/general laziness decided to settle in with the new year.

So I decided to get back into the drawing game with Pokemon.  And these three little guys have gotten really popular in that community, and I do think they’re adorable.

So here we are – Spike the Pincurchin, Fred the Snom, and Pooka the Pyukumuku.  I don’t really do fanart, but this was fun.  Might do it again in the future. 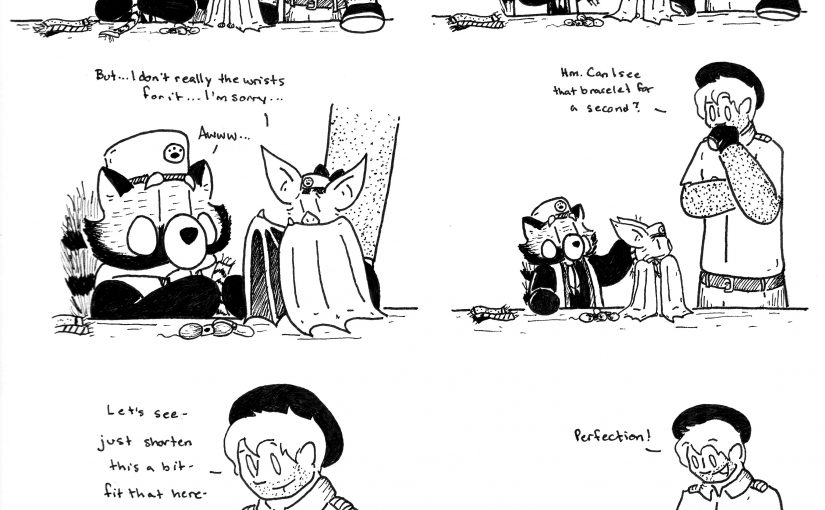 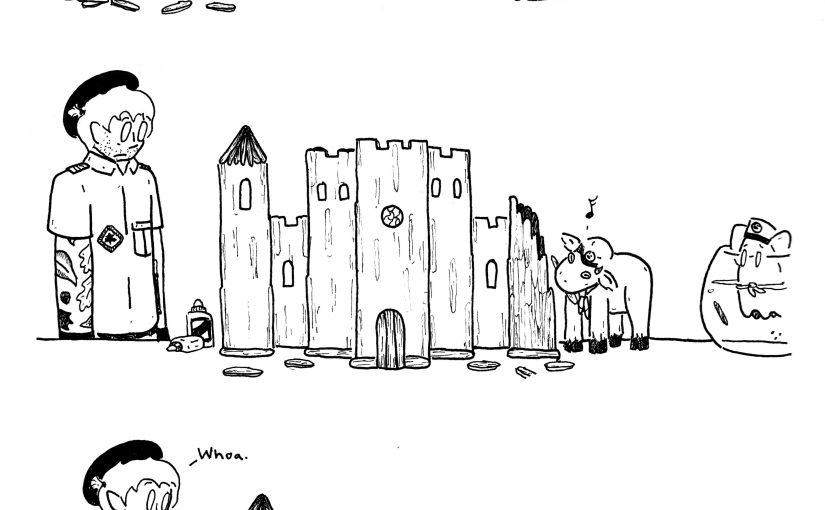 Julie-Anne and Eliza clearly subscribe to the same school of thought when it comes to art: more is always more. 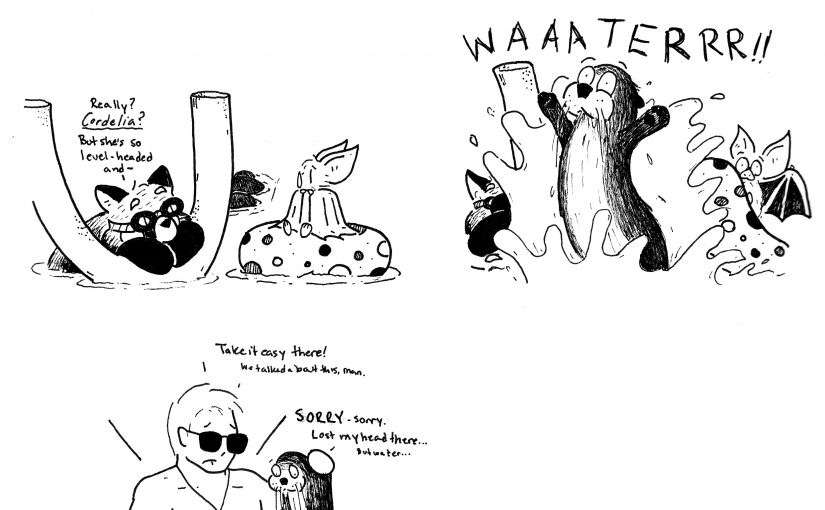 I did have to check if bats can swim.  Turns out they can.  The more you know. 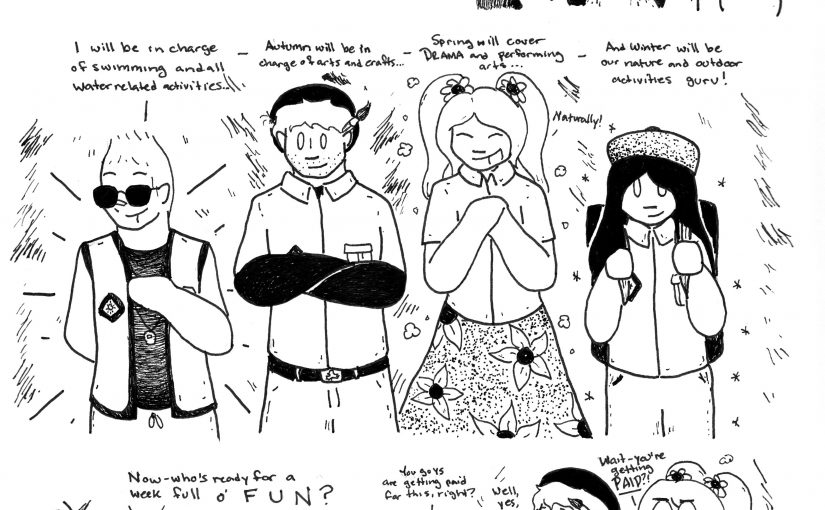 Paw Pioneers AND the Seasons in one storyline? 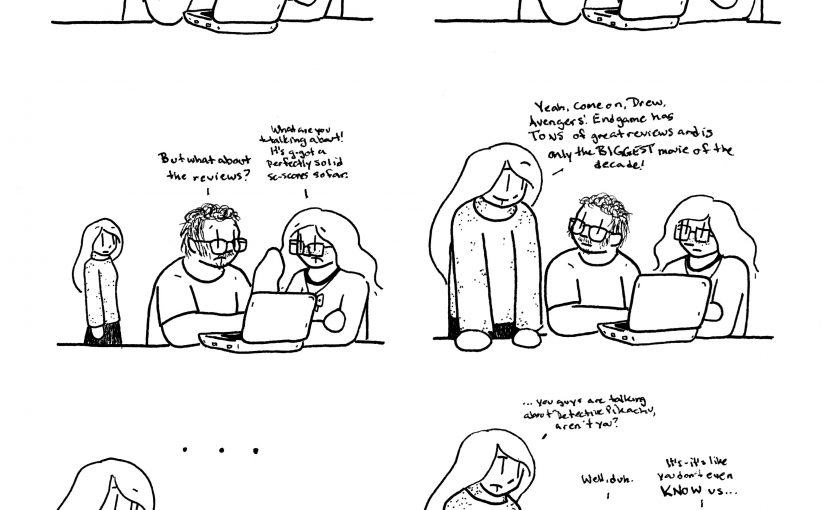 Yep.  Still haven’t seen Avengers: Endgame.  Actually not entirely sure when I am going to see it, ’cause I’m so far behind on the MCU movies.  Also not sure that I even really care enough to go see it.  Blasphemy, maybe.  But really I just don’t.

Detective Pikachu, on the other hand…well, as the hardcore Pokemon fanboy that I am, I’m all for it.  I am doing that fun thing where I’m constantly checking Rotten Tomatoes to see what its score is, and right now it’s holding at a steady 70%, which isn’t bad at all.  I have heard that it may skew more towards fans of the franchise itself, and all of the good reviews I’ve seen come from non-professional critics who are fans of Pokemon itself.

Which, I mean, I’ve been playing it for two thirds of my life at this point.  And if other fans are loving it, then bring it on. 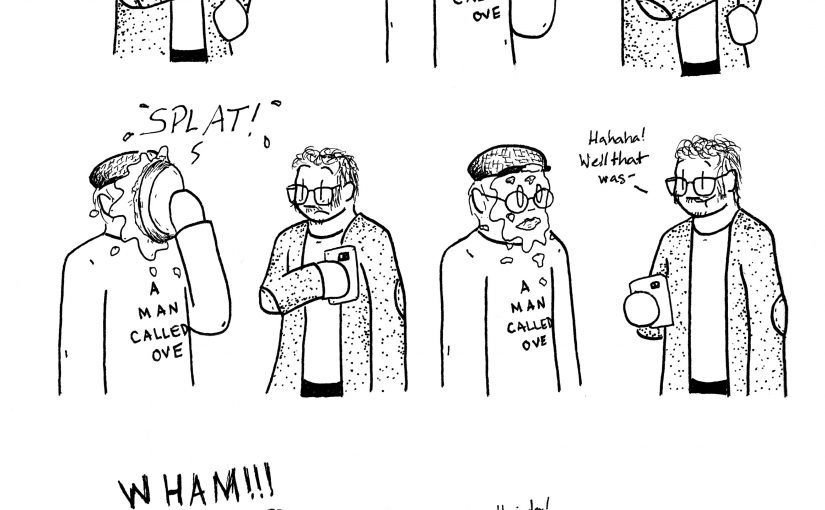 Pretty much how it’s been reading this book.

In one chapter, I’m reading about Ove getting ready to kill himself in his garage.  The next, he’s punching a clown.

Don’t get me wrong – I’m loving it.  Frederik Backman is an amazing writer, (almost) all the characters are endearing in their own different ways (we do not talk about the Blond Weed), and I can’t wait to see how it all comes together at the end.  But man.  Some points are just rough.

At one point I had to come downstairs and straight out say to my mother, “Please – no more flashbacks.  I can’t take it.”  Again, not because it’s written badly, but because Ove’s life is a long series of sadness and loss.

But I still highly recommend it.  Seriously, makes me want to pick up the rest of Backman’s stuff.

As soon as I get through my very, very long list of other books I want to read.

NOTE: My mom has been begging me to read this book for at least the past 2 years now.  And yes, she is more than pleased that I’m reading/enjoying it. 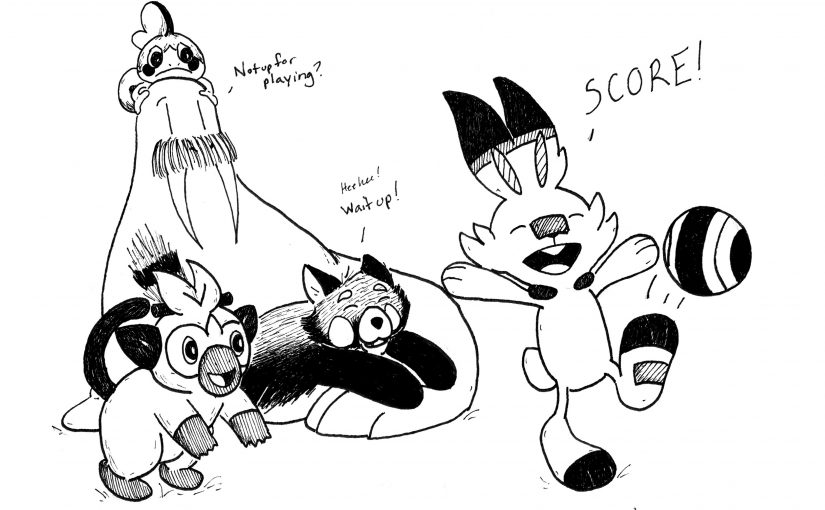 I’m pretty sure I made noises that most grown adults usually don’t make upon seeing the announcement.  But can you blame me?  I’ve been playing these games for the past 18 years or so (which is a good two-thirds of my life at this point, holy crap).  And for once – for ONCE – I have the right system to play this brand new game and I don’t have to WAIT.  EXCITEMENT.

There was a brief moment time when I may have turned my back on it, but that was like, middle school, when it wasn’t cool to like anything, really.  But now here I am, ready and set for the next generation to take me on another adventure into a whole new region with brand new Pokemon.

Only downside is that I have to wait until Fall for it to come out.  But you can bet that I will be snatching that sucker up the moment it’s available.  Because that’s one of the upsides of being an adult with a paying job – I can do that.  And no one can stop me.

Bring it on, Nintendo/Game Freak.  My body is ready.

NOTE: This is the first time I’ve drawn Pokemon since I was 11.  And I am pretty damn proud of how they turned out. 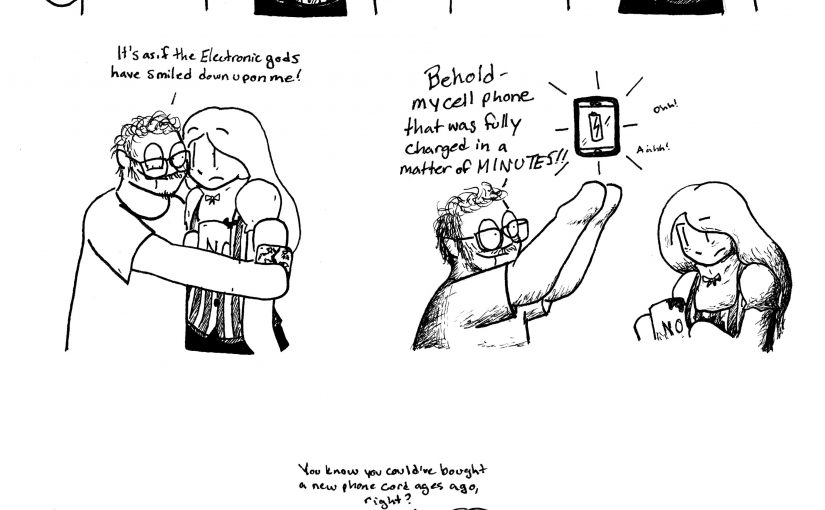 For a while there, I wasn’t sure why it take forever and a day for my phone to charge up.  Was praying it wasn’t the phone.

Thankfully, it was the cord, which did indeed have to be in the exact right spot to get any sort of charge any at all.

Overall, I will take having to buy a $7 phone cord over what could’ve been a very expensive phone repair. 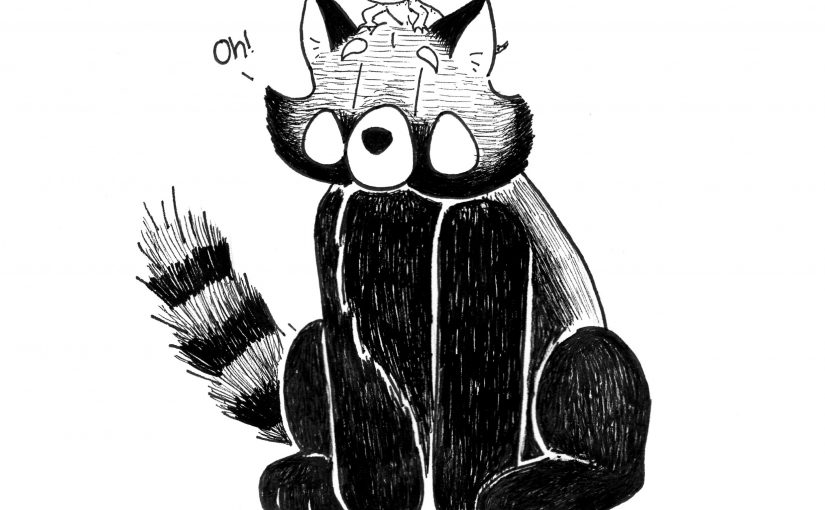 WARNING: This post will mostly be me gushing over the family gecko.  Just wanted to let you know.

“When did we become lizard people?” – my mom.

This past Thanksgiving, we had to say goodbye to our dear diva gecko, Donnie.  She passed away from a genetic condition, as it turns out, after almost 10 years being a part of our family.  It happened quite quickly – we thought she would rally, like she had whenever she’d gotten sick before.  This time, though, she didn’t.  She waited until we brought her home to go.

As you can imagine, it was a terrible Thanksgiving, best summed as the food was great and I cried.  We were suddenly left with an empty tank and a little gecko shaped hole.

A couple days later, we made our way over to Petco to see what we could do to fill it again.

We wandered over to the leopard gecko tank, taking in the baby geckos, all stripes and no spots, just meandering around/hiding/snoozing away.  That’s when my mom and I saw him.

This tiny little gecko literally climbs over everyone else and just stares at us.  He was paler than the rest – about ready to shed, as it turns out – and quite a bit smaller, but he managed to make himself noticed.

My mom and I basically looked at each other and said, “That’s the one.”

And that’s when we met Raffie.

We’ve had geckos for 14 years now – since Mom first brought home our first one, Leo, for my 13th birthday.  And never have we had one quite like Raffie.

A few facts about our leopard gecko pal:

1. He’s not so tiny anymore.  We’ve had him for two and a half months now and he’s just grown like crazy.  Might be the biggest one we’ve had.

2. He’ll eat anything and everything you put in front of him.  The others (Leo, Angelo, Donnie) would maybe eat a few mealworms and save the rest for later, let the crickets run around a bit before finally catching them.  Not Raffie.  It is his mission to eat everything in a night.

3. He’s got a mustache.  A couple of spots right on his snoot, which he had even as a little one.  Hence the monocle in the picture.

4. He has an emotional attachment to a tree.  Seriously.  There’s a tree in the corner of the tank that he loves.  Used to climb it when he was small enough.  Now he can’t.  Doesn’t stop him from trying, though.

5. He’s always looking up.  Not sure what he’s looking at.  But he always seems to be staring up at something.  The pictures on his tank, the lamp cord, us – just, looking up.

6. He’s curious.  In a way that none of the others really were.  Donnie wanted to be left alone, Angelo was fine chilling under the log, Leo seemed quite content staying still – but Raffie is always moving around the tank.  He seems like he wants to see what’s there, and what’s outside it.  We have caught him staring at us more than once.

7. We each have a nickname for him.  Buddy, Snicklefritz, Raffie Daff – all adorable.

8. He seems to have finally settled in with us.  This weekend, his tank needed to be cleaned.  So, Mom moved all his stuff, started washing things off, and then we had to figure out how to get HIM out of the tank.

He’d let us pet him before – seemed perfectly fine with it.  But we’d only gotten him out once before and he didn’t quite seem to enjoy the whole experience.

This time, though, I laid my hand down, and – one foot, then another foot – he stepped onto it.  And, gently, gently, I managed to scoop him out!  And he didn’t flinch or anything.  Maybe a bit confused at first, but then he started to walk along.  Not rushing, not jumping, just walking.

Huge breakthrough moment for us.  Donnie hated being touched period.  And here we were, with Raffie looking around, crawling from hand to hand.

I think the whole family has indeed fallen in love with our little scaly friend.  And I think he likes us as well.  At least I hope so.

Here’s to you, Raffie!