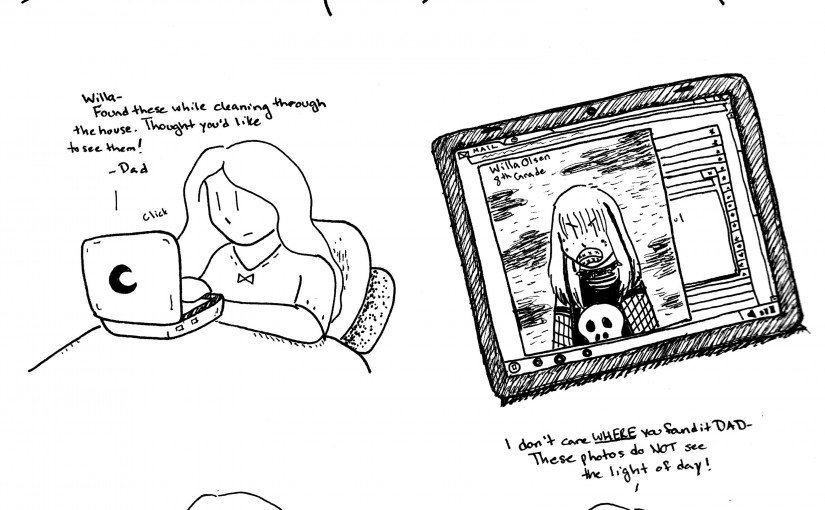 Does anybody actually like looking back at their old school photos?  Like, seriously, you whip them out and just get nice, warm, fuzzy thoughts about the days of yore?  ESPECIALLY middle school?

It also brings about a bunch of questions about those days.  Like, why was I so hostile to my gym teachers?  Why did I think it’d be cool to curse in every other sentence?  Why did I have to get stuck with the world’s worst math teacher?  And why the crap did I not want to wear my glasses, knowing perfectly well that I can’t see that great without them?

Answers:  because I was out of shape, I was a fourteen year old boy, the world is unfair, and I thought I’d look like a dork. 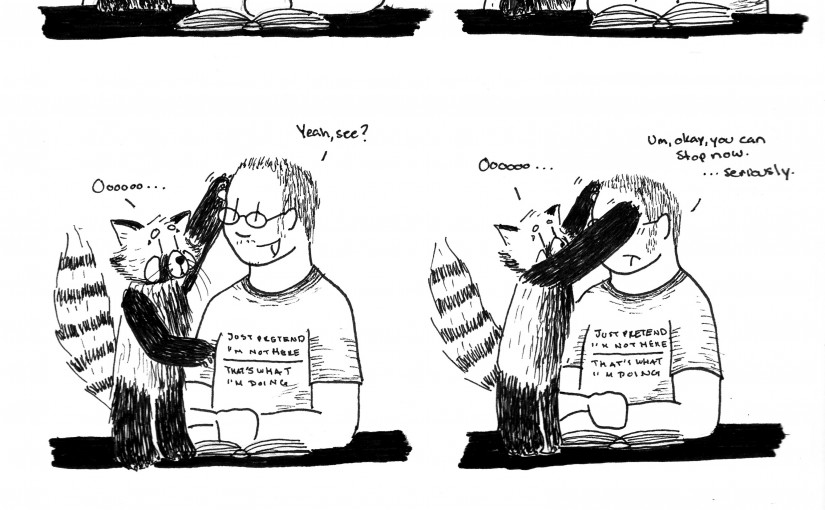 Yep.  Got a haircut.

And yes, it is super short.

Like, I can see that weird bump on the back of my head that usually hides beneath my curls.

Just in time, though, with all the warm weather we’re having this week, so I don’t have to deal with this sweaty mop of hair.

I have startled myself several times walking past a mirror.  I guess I got so used to the longer hair that it was just like, “HOLY CRAP – oh.  Right.  Haircut.”  Which probably means that it has, in fact, been a bit too long since I last got a haircut.  To the point where I can’t actually remember when that happened.  May have gotten scolded by the barber because of this.

Ah well.  Don’t expect the short hair to be around for long.  What with the rate my hair grows, it should be about a nice, normal length in a few weeks.

Then proceed to fuzz out shortly thereafter. 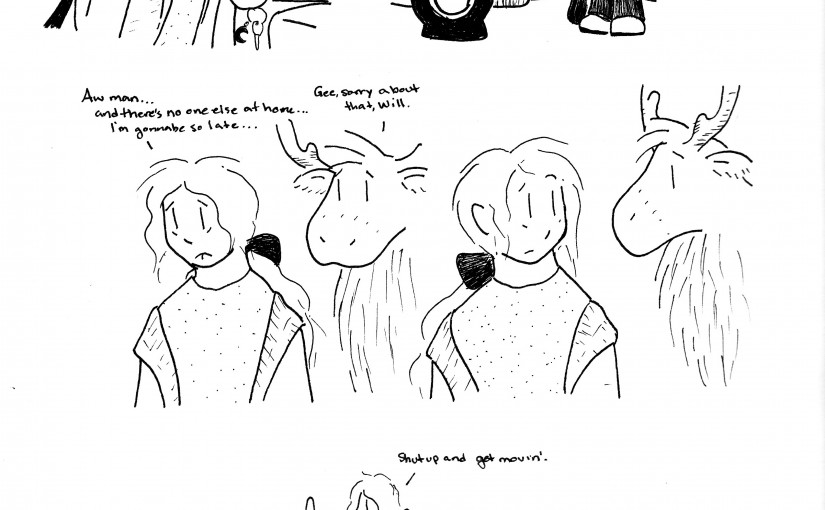 Honestly, I’ve had this idea for a while now.  And here it is.  Knew there was a reason why Jeff has stuck around after Christmas.

I think Lars is to me as Jeff the Reindeer is to Willa.  Just looking back on it. 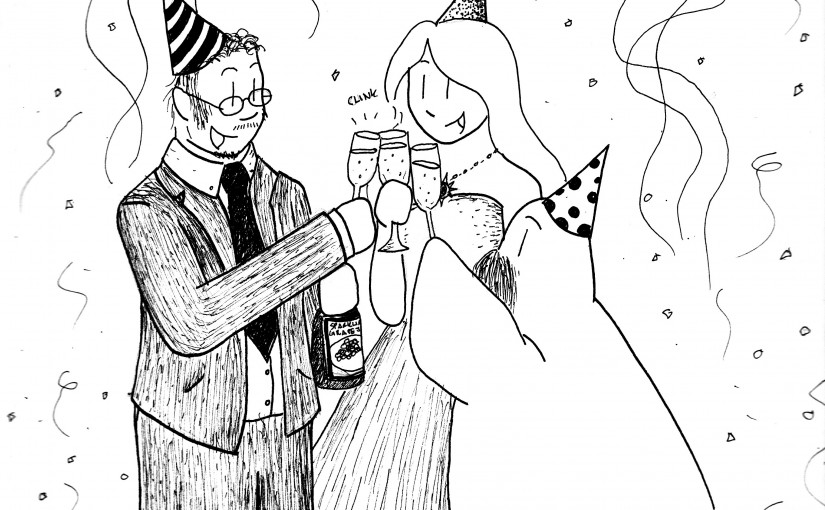 Can you believe it?  Because I can’t.  Seriously, I can’t.  I’ve actually managed to update three times a week for the past year, only missing one day thanks to a nice little eye infection around my birthday (see Sept. 14, Cyborg Eye, for more details).  But still, for the most part, this blog has been updated on a regular basis.  Like I said, really can’t believe it.

When I first started this blog, I wasn’t quite sure what I wanted to do with it.  I mean, I know I wanted to draw – it was right there in the title.  And I wanted a walrus to be a part of it, because again, look at the name of the website.  But other than that, wasn’t entirely sure what I wanted to do.  Maybe a day-in-the-life, comic diary style sort of thing.  Which, you know, I think I’ve done quite well.  What I didn’t imagine was where this blog would take me, creativity wise.  I’ve created a few characters (Willa!  Jeff the Reindeer!  Eliza and Mere!), had a couple of storylines – it’s amazing what can happen when a creative project like this evolves over time.  That’s a good way of seeing this blog, as this massive project that keeps me busy and constantly drawing/writing.  Keeps the creative juices flowing, so to speak.

Now that I think about it, a lot of things have happened since starting this blog.  I got a job, dealt with car issues and technology troubles galore, made some friends, actually left the house on a regular basis, all the while learning how to adult and trying to make sure my anxiety doesn’t completely take over.  And they’ve all been recorded right here on the blog.  AND I’ve actually had readers!  Who knew?  Believe me, I am more than grateful for you guys stopping by for a read and hopefully a laugh.  Means the world to me.

So, what’s going to happen in the next year with this blog?  Not entirely sure.  Maybe some more storylines, delve into some backstories – who knows, really?  Maybe it may turn into something more than just a blog/diary.  I kind of feel like it has taken that turn in comic territory, which is something that I’ve wanted to do for a very, VERY long time.  But again, it’s all up in the air at this point.  But I can’t wait to see what happens.

Here’s to you, I Draw Walruses.  Happy Birthday, and let’s go places. 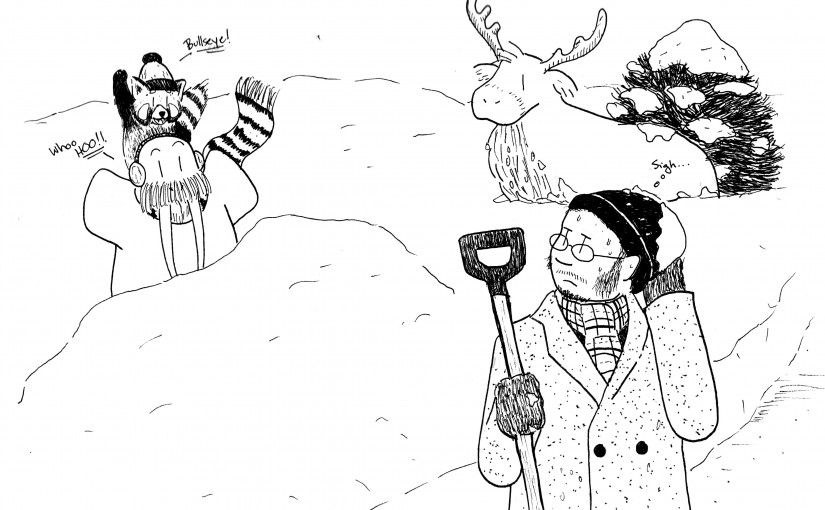 If you haven’t been living under a rock, you’ve probably heard of the gigantic snowstorm that rolled through the East Coast this past weekend.  And Northern Virginia was caught right in the middle of it.

This whole past week, I kept hearing about the “Snowpocalypse” – a term that they use every time something like this rolls around – that was going to hit us.  And it’s not that I completely wrote them off, but I did think that people were blowing it way out of proportion.  I mean, Giant was packed with people grabbing water and paper towels and other necessities, in fear of whatever was coming.  And I did already talk about the library turning into a battle zone.  But still, I thought, “Geez, guys, it’s just snow.  What’s the big honking deal?”

Now, I don’t think I live in a particularly snowy part of the US.  But I have noticed a trend that when we get snow, we get SNOW.  And lots of it.  This past weekend, though, was like nothing I had ever seen before.

Usually when it snows, it’ll start, then stop for a bit, then start up again.  Not this time.  It literally snowed for 36 hours straight with no signs of stopping.  My mom and I just stared out the window, watching the snow blow sideways through our neighborhood, thinking the whole time, “Maybe they didn’t overreact this time.”  And they most certainly didn’t.

We must’ve gotten somewhere between 18 inches to 2 feet of snow, all in the span of a day and a half.  It was craziness, I tells ya.  During Saturday, we kept telling ourselves that there was no way we were heading out into that mess.  But after seeing our neighbors break out their shovels and snow plows, it dawned on us that maybe we should at least make some headway on our driveway.

Smart idea, considering that Sunday morning we woke up to more snow covering our freshly shoveled path.  If we hadn’t gone out there when we did, we’d be faced with about two feet of packed snow to dig out from.  Not a fun idea.

Thankfully, we did manage to shovel the driveway, as well as make a path through our front porch for the mailman.  We also had an angel help us blow through this huge snowdrift that had collected at the bottom of our house – that angel being our neighbor with his high-powered snow blower who managed to make a decent sized opening for my car at least to get through.  Thank God – no way my mom and I could’ve made it through that mass of snow by ourselves.  Really need to bake him something to show our appreciation.  Because nothing says thank you like baked goods, right?

Still had to widen the opening a bit, as well as chip away at some packed snow that was preventing my car from actually leaving the driveway.  But for the most part, we are free!  Not that we have anywhere to go, mind you – the library’s been closed for the weekend, as well as today, so no work for me.  I’ll have to see about tomorrow.  Gonna have make up some hours in the next couple of weeks.

Looking out the window now, all I can see are just massive drifts of snow, piled up against the sidewalks and corners, the bushes (and Christmas lights – whoops) buried beneath heaps and mounds, and my dad’s car, with his side view mirrors being the only thing I can see poking out from the snow.  This is definitely going be around for a good long while, at least through February.

I said I wanted to some snow this winter.  And trust me when I say, I got it.

Careful what you wish for, folks. 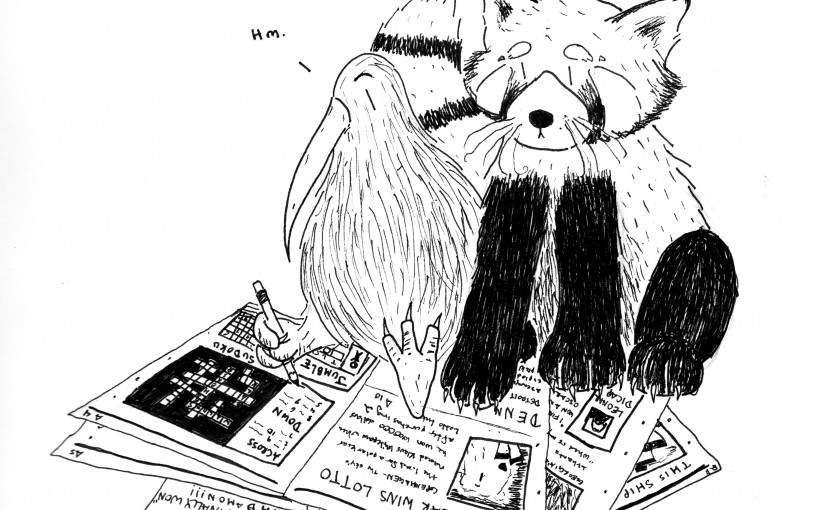 It’s been a tiring kind of week.  So what do I do when I’m tired?  I draw a Kiwi Bird and a Red Panda doing a crossword puzzle.  Because red pandas are adorable and kiwi birds are just funny looking birds.

Keep in mind, these two may pop up sometime in the near future.  Who knows?

Also, red pandas are kind of hard to draw.  You need to make sure that they have the right markings, or they’ll end up looking like a raccoon.  I think they’re related.  Are they?  I don’t know.  Google to the rescue, I’m sure.

Side note: whilst writing the headlines for the newspaper, I realized that the Oscar nominations came out.  Hence, the Leonardo DiCaprio headline (here’s hoping it’s actually prophetic – guy deserves it.  Don’t think I’ve ever actually seen him in a movie, but hey).  Also realized that I did not see a whole lot of movies last year.  I saw a grand total of two in theatres: Pitch Perfect 2 and Inside Out – twice.

I like movies.  Just didn’t get around to seeing a whole lot of them last year.  But I might want to check out a couple of the ones nominated.  Probably The Martian and Brooklyn.  Maybe Mad Max: Fury Road.  Not so much Room.  Because I’m not sure I’d be able to handle it.  Props to Brie Larson for getting nominated, though.  Saw her back in the day in a Disney Channel Original Movie Right on Track.  And wow I got off track.

Anyways, Eliza.  Mere.  Adorable.  May show up again.  Because awwww. 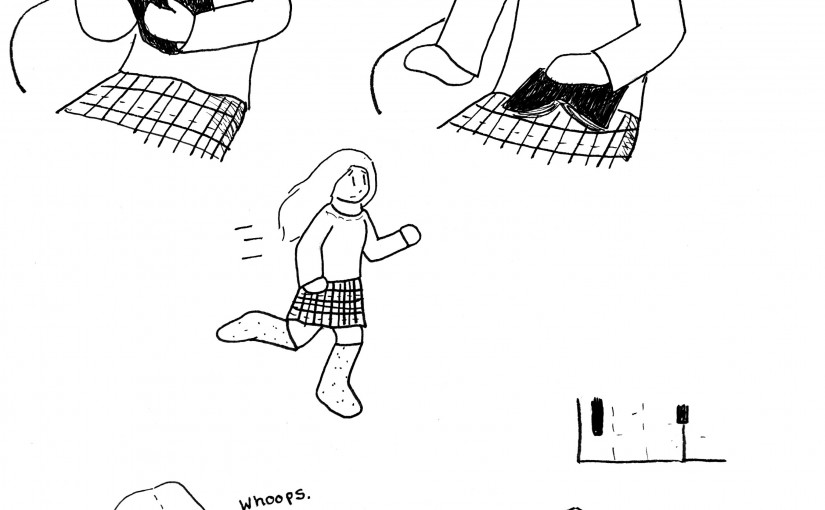 I was going through my comics, and I realized that in almost every single one that had Willa in it, she is drinking tea.  So I decided to play off of that here.

I really need to start developing these characters…