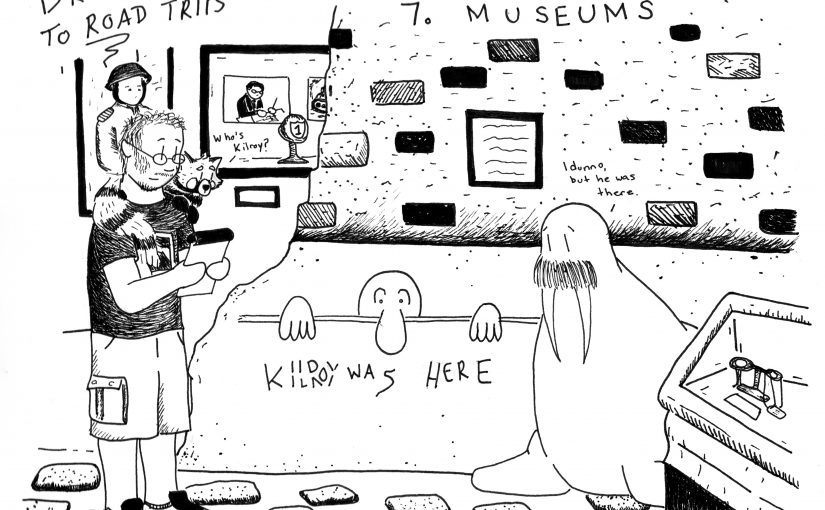 If you’re planning a road trip, please keep in mind that not only are you heading off to some set destination, but that you are also giving yourself a massive opportunity.  A chance to stop at places along the way that you ordinarily wouldn’t have the opportunity had you not decided to undertake this trip.  So I highly recommend taking advantage of this and plotting in some stops to see some super cool stuff, like museums.

Now, if you’re not into museums, well, I suppose this could apply to a number of other attractions.  But for the sake of this blog post, let’s stick with museums and historical sites in general.

Planning is the key word when it comes to these types of excursions.  What day will you be arriving at this spot, in regards to the trip as a whole?  How much time do you have to look around the place?  These are the important questions to ask yourself, especially if you have a somewhat rigid schedule to stick to.  But not too rigid, now – you do want to enjoy yourself at these museums.  And you’re going to hitting some awesome museums.

The type of museum may also matter, depending on the interests of you and your companions.  For example, one of your crew might be a Military Historian, and has passed on this love of history and learning about the past to you as well.  So you might decide on the second day of your trip to stop by the First Division Museum in Cantigny Park, just outside of Chicago.  It’s going to a gorgeous place, with some lovely gardens and rolling green hills, a perfect place for a picnic or a day camp to be set up.  The museum itself will have actually have what is essentially a tank playground – model tanks that can be climbed on, and will be swarming with children.  You might want to see if you can do so as well, just to assure yourself that you’re not that old yet.

After a moment of terror where you see a closed sign outside the museum, only to discover that yes, it is open, someone forgot to switch the sign around, you will find yourself in a very well done museum concerning the First Infantry Division.  Seriously, with life sized displays that take you through a destroyed World War I town, complete with an underground bunker and fallen timber and barbed war defenses, into the ending days of World War II and the jungles of Vietnam, with artifacts aplenty detailing the Division’s part in these battles and the people within it, you’re going to be blown away.  You will definitely understand why the Military Historian of your group wanted to stop by here.  You’re also going to be very glad that you’ve got most of the day to tour the place, as it’s only a short drive (in comparison) to your next place.

Going along, you might decide to stop off at some historical sites devoted to certain presidents, like say Herbert Hoover in West Branch, Iowa.  You might see the two room house where he grew up, in the center of his own childhood world, with his schoolhouse and the Quaker Meeting House not too far away.  You’ll get to see the statue of the egyptian goddess Isis, donated by the children of Belgium, grateful for all of his help during World War I.  Proceed then to the museum, where you will learn more about Herbert Hoover than you ever thought possible.  Like the fact that he was orphaned by the age of 10, or that he was a self-made millionaire who journeyed to Australia and China on mining trips, refusing to take a salary as President.  You’ll learn of his nickname “The Great Humanitarian,” stemming from how he and his wife Lou helped those struggling in Europe during World War I, especially in the aformentioned Belgium, as well as those who had suffered from flooding in the Southern US.  In the end, you will feel a bit bad for him concerning his unfortunate presidency, and thankful that he managed to rebuild his reputation post-World War II.  Again, another place you’ll be glad you took your time, having all morning at least.

Now you might not have this opportunity of leisurely walking around at other presidential sites, like those of Dwight D. Eisenhower in Abilene, Kansas or Ulysses S. Grant just outside of St. Louis, mainly due to the time that you’ll arrive there, or the heat itself.  Still, take a look around, see what you can, learn that Eisenhower was one of 6 boys who all went on to do great things or that Grant was good at two things: being a General, and being a familyman, but not much else.  Really, it’ll be worth it.

There might a chance, though, that you’ll come across a place that wasn’t necessarily planned, but someone in your party will really, really, REALLY want to go see.  Maybe it’ll be the John Wayne Museum in Winterset, Iowa, because that same Military Historian is also a huge John Wayne fan.  Go see it – that John Wayne fan will be thrilled.  Even if you haven’t actually seen an entire John Wayne movie, which is surprising considering this fan’s love of him, you’ll still have a good time.  You’ll see outfits from different John Wayne movies, or donated articles, like Maureen O’Hara’s shawl and the cart from The Quiet Man.  You’ll get a close look at the house where he was born, as well as his own car and address book, with Ronald Reagan being on the same page as the Repair man.  The workers will be lovely, and you’ll wonder how they manage to watch the same movie on repeat for three months without losing their minds*.

All in all, you’ll have a great time stopping along the way at these places.  You’ll take away some memories, as well as a couple of postcards and a keychain.  Plus, they’re great places to walk around before you have to hop in that car again and drive some more.  Always be ready, though, to stop for another necessity along the way, one that might be slightly more unplanned: food.

*Seriously, they’ll pick one of John Wayne’s movies and play it for THREE MONTHS in the gift shop/lobby.  Oof.