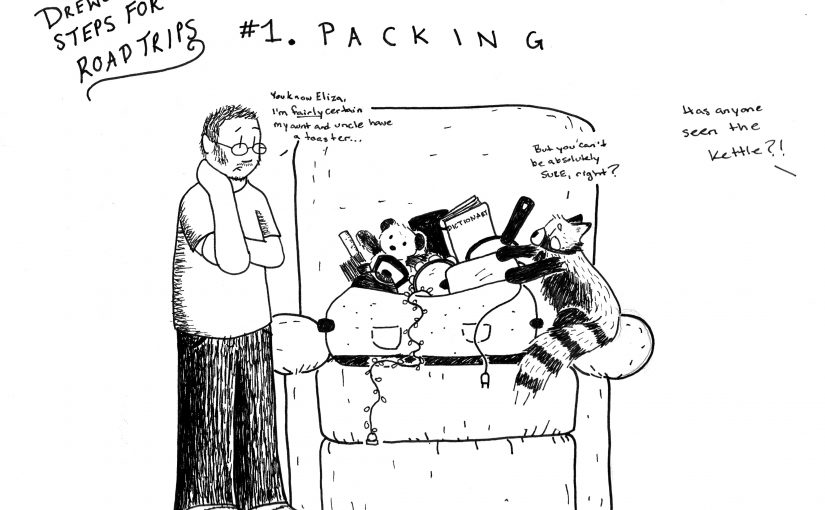 So, you’re thinking about taking a road trip?

Cruising across the country, taking in the sights, meeting people across the way – but you’re just not sure how?

Well, lucky for you, I just so happen to be an expert* on such a subject, seeing as I recently come back from taking a road trip out to Colorado and back.  So I thought that I’d give you a bit of a guide to such undertaking called Drew’s Steps to Road Trips.  Over the next few weeks I’ll be teaching you everything** that I have learned from my own personal experience.

First up, packing.  Now, this is one of the most important parts of the venture, as this is where you’re pulling together all the stuff that you’ll be taking with you on the trip.  And unless you’ve secretly invented some teleportation device between your house and your car that you’re not telling people about (selfish), or you’re actually a wizard, you need to make sure you’ve got everything you need.  Things such as:

Now that you have all your stuff together, make sure you have a duffel/suitcase big enough to hold it all.  Not enough room?  No problem – roll out that backpack to catch the overflow.  Backpack too old and grody since you haven’t used it since college?  Get a new one – your stuff will thank you for not being covered in gunk.  Once you’ve got that over with, just start  folding everything and setting it nice and neatly inside the bag.  Best to do this the night before you leave.  Bathroom stuff can wait until morning.  Just be sure to remember.

Obviously there’s a whole list of things that you don’t need.  Just take a look at the comic as an example.  Don’t be an Eliza.  Leave the toaster at home.  And you’ll won’t need that tambourine or that dictionary.  The teddy bear is an exception.  And maybe the top hat.

Unless you’re that selfish guy with the teleportation device.  Share the wealth, man.

And there you go!  All packed and ready to go.

Time to take care of some last minute details…

*Kinda.  Sort of.  Maybe expert’s pushing it a bit.

**Or least enough so you don’t end up completely lost.