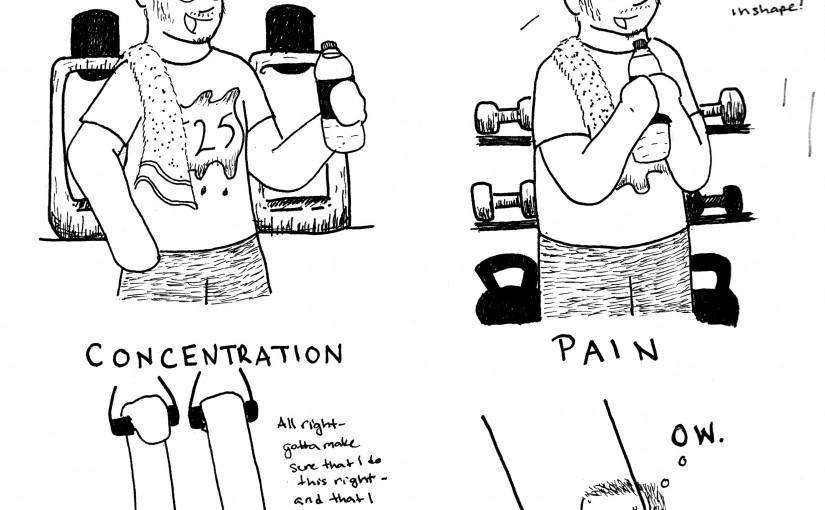 During the abnormally long process of me signing up for a gym membership, one of the things the manager mentioned to me was what working out can do for anxiety.  And with anxiety basically being my default mode, I was more than interested.  From what I gathered, exercise can alleviate this feeling and help you manage it better in the long run.

Now, I’m not sure if it’s helped me outside of the gym yet – I still find myself worrying about everything in the entire world.  But at the gym, it certainly does take a back seat to the following emotions:

Pride: I have actually made it to the gym at least twice a week for the past month or so.  This, coupled with the sheer fact that I decided to acquire a gym membership – and that I have the funds to pay for it! – I mean, why shouldn’t I feel proud of that?  I’ve also managed to lose a couple of pounds as well!  It’s a start, at least.

Hope: God, I hope I can lose more weight.  And if I keep going to the gym, then maybe my goal of hitting 200 pounds will be a reality.  Here’s hoping.

Concentration: Using some of the equipment does require me to be focused on what I’m doing, so that I don’t end up injuring myself in some ridiculous way.  And yes, I do in fact forget to breathe.  I don’t know why, I just do.  I have almost passed out once from this during a training session.  Bad idea.  Breathe, people.

Pain: Self explanatory, really.  Some of this stuff hurts.  But I guess that’s a good thing?

Anxiety does creep in, I have to say, especially when I’m on the treadmill and they’re playing the bloody news, which doesn’t help at ALL.  But I’ve learned to situate myself in front of the TV that’s playing sports.  Do I care about sports?  Not really.  Would I rather watch something about March Madness than the Election?  Hell yes.

There is also a bit of  self consciousness that sticks around as well.  I don’t want people to be watching me work out.  Not that they actually are, but still.

All I can do is keep going.  And maybe, just maybe, my anxiety will soon be under my control.

We can all hope, right?

One thought on “Things I’ve Learned at the Gym: All the Feels”