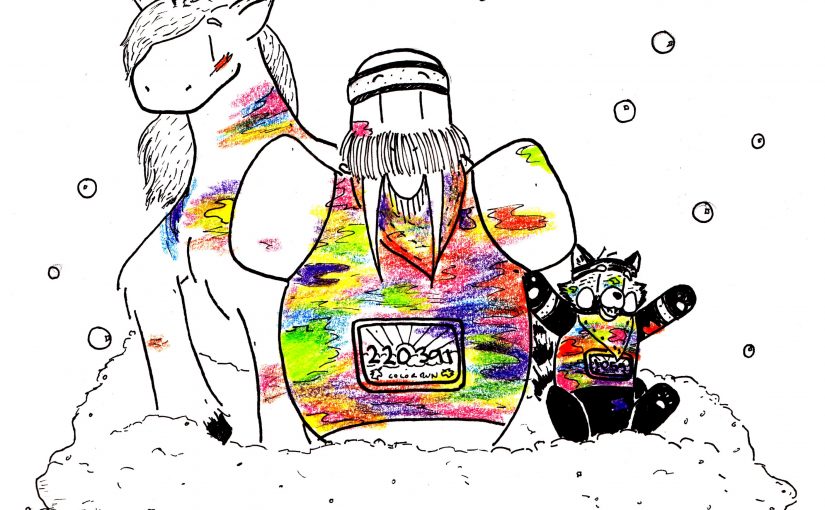 Drew did a thing this weekend.  A thing that involved unicorns, a foam pit, getting covered in color, and – perhaps the most unbelievable thing of all – actual physical activity.

More specifically, I took part in the Color Run at the National Harbor.  And I had a blast and a half.

Now, these are all things that I would have never thought I’d say.  I mean, taking part in a 5k?  And actually having fun while doing so?  But I did.

Let me back up a bit.

My dear friend Chelsea, who has been one of the driving forces behind me actually getting out of the house and doing things, approached me a few weeks back, wondering if I’d be interested in running this 5k.  And no, I did not laugh in her face because me and running aren’t exactly friends.  But I did have to think about it.  Because again, it’s running.  I’d tried running before and…oof.  So I gave it a bit of thought, looked up the Color Run online, and finally agreed.

I had to admit, it did look fun.  The basic premise is that you run/walk/jog a 5k course, and along the way, you get blasted with color.  That piqued my curiosity.  What really drew me was, well, the fact that their mascot was a unicorn.  And you got a unicorn medal if you finished.  And I mean…come on.  Unicorns.  Me.  It’s a perfect match.

Before diving in completely unprepared, I did take a practice run, measuring out a 5k (3.2 miles) run through my neighborhood.  And it didn’t completely suck.  I managed to finish it in under an hour, which was great, and I only stopped once.  I fully credit me going to the gym for this, giving me the stamina to keep going and not completely fall apart.  I did hurt for a few days afterwards, but for the most part, I felt pretty okay.  In fact, I may add running to my fitness routine.  I didn’t feel that anxiety that I get when I go to the gym sometimes.  It was awesome.

Not so awesome was the fact that I had to get up at 5:45 Sunday to get to the event.  Really, any time before 7:30 isn’t actually a time.  But there I was, awake, dressed, and somewhat ready when Chelsea came bounding up the driveway with her parents in tow.  And we were off.

Got there on the early side of things, around 7:00.  Allowed me time to check in, grab my t-shirt and other goodies, such as a sweatband and a temporary tattoo that still hasn’t worn off.  We bounced around the sponsor tents, gleefully taking part in the free items to be had.  Lays, the main sponsor, was handing bags of potato chips, which were all well and good, but did they have to only have Original?  I mean, a bit of BBQ or Sour Cream and Onion would’ve helped.  Just saying.

I should also point out that the main area was indeed Unicorn Central.  They were selling unicorn stuffed animals, unicorn keychains, there was a guy running around in a unicorn costume – so much unicornity.  I was a happy camper.

Side note: some people did run with their unicorns in hand.  And the poor things did get covered.  Maybe that was the point.  But still.

They did have a stretch session, which turned into this massive Zumba class, complete with instructors.  Which I did not take part in because reasons.  I did stretch, though with Chelsea and her parents.  Just, not necessarily in a Zumba fashion.

Also, can I just say that people will go crazy whenever free stuff is offered?  Seriously, the moment they started firing free shirts/arm warmers/headbands/God knows what off the stage, people were going nuts.  Just thought I’d mention that.

Finally, we made our way to the starting line.  It was time.

And we were off.

Chelsea and I managed to jog along so we wouldn’t get trampled, watching as her parents slowly took off into the distance because they are much more in shape and life’s not fair.  We finally slowed down to a walk, and proceeded on our merry way.

We did not run the whole way, thank God.  We did a walk/run.  Walk for 5 minutes, jog for a minute, and repeat.  Really, the best way to get through the run.  No need to expend all your energy at once.  And we weren’t alone in this – lots of others had decided that this was the best approach to the 5k.  Some did run the whole way, I’m sure.  Some walked.  Some jogged.  I think the main objective of these events is truly to have an experience.  To get covered in color and get through the course.

Speaking of, there were four color stations: green, purple, pink, and yellow.  And the coverage did vary.  The green people, for example, were a bit skimpy.  The yellow volunteers really went for it.  Looked like I got hit by a school bus after that station.  Also, it varied from runner to runner.  Some barely had any color at all.  Others looked like they had a run in with Oscar the Grouch and Grimace before colliding with Big Bird.  My goal was to get as covered as possible because it’s a color run, people.  That’s the whole point.  Make me look like a walking rainbow.  Don’t be stingy, color me up!

The first mile felt like a mile.  The second mile did not.  And the third mile lasted forever.  But eventually, Chelsea and I hit the finish line, running through the foam pit and back into the main area.  And it was a glorious feeling.  I’d done it.  I managed to get through a 5k.  I got that unicorn medal.  I EARNED that unicorn medal, dammit.  I earned heading towards the soundstage, where they were having Color Blasts, in which everyone threw colored powder at each other because we all could use more color at a color run.  I earned that delicious lunch at Nando’s and walking around the National Harbor with Chelsea’s family looking like a sentient rainbow.

And so was the shower and two hour nap I took afterward.

Would I do a 5k again?  Probably, actually.  Chelsea listed off a number of others, including a Fit Foodie one that came with snacks afterwards.  And I mean, free food.  Would I want to get into better shape first?  Absolutely.  Hence why I want to add more running into my routine.

All in all, an experience that I never thought I’d partake in, and one that I thoroughly enjoyed.

2 thoughts on “We Interrupt This Storyline to Bring You Unicorns”