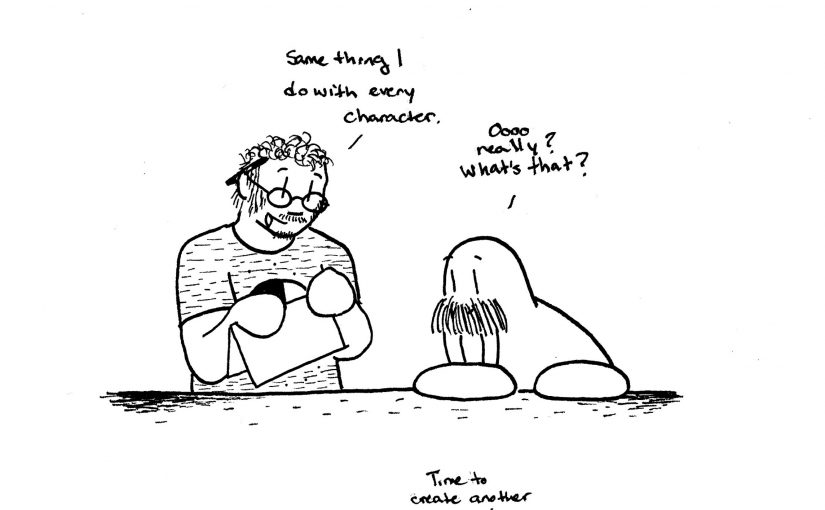 This is something that I’ve literally been doing for ages now.  I’m not sure if it’s a hobby or what, but I love making up characters.  I think I’ve mentioned it before here, but it’s honestly one of the more fun and easier parts of creating as a whole.  I like dreaming up how they look like, what their names are (one of the most important parts, in my opinion), what their personal style is, what powers do they have if they have any – and on and on, just all the little details as to what makes up that character.

And what do I do with those characters?

My brother and I would make up characters all the time, but at least we would do something with them, acting out stories where our characters would have adventures or simply go through their daily lives.  But the characters that I’ve made up in my spare time?  Yeah, I don’t do much with them.

Maybe I’m overthinking this.  Maybe other people do this, too.  It’s just that I’ve realized that I have a LOT of characters.  Like, I’ve had to make lists to keep track of them.  Lists and lists and more lists.  And that’s all I do!  I create them, write down their names, and just leave them there.

The characters I’ve created for this blog – Lars, Willa, Eliza, Jeff, and Cleo – are thus far the only ones that I’ve actually done anything major with.  And I feel like I really should do something with the bazillions of other characters that I’ve made up.  At least draw them or something.  Because I do feel like I’ve made up some interesting characters.  I just need to make them…come to life, I guess.

But that’s the hard part.  Trying to figure out what these characters are supposed to do – the story/world that surrounds them, that they exist in.  Like, I can see it in my head, but getting it out onto paper for someone else to see isn’t as easy as I would like it to be.  Which might be why I’ve been avoiding writing all this time.  Hm.

Just something I’ve been thinking about lately…