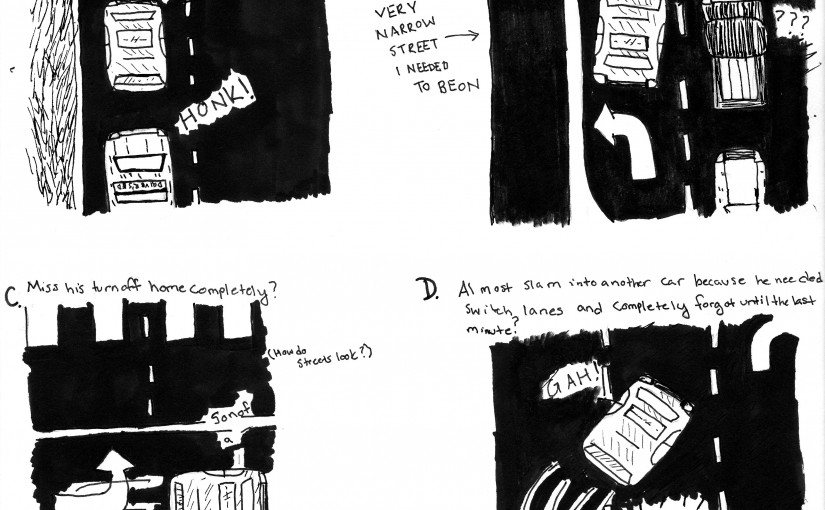 Usually all on the same trip.  Like this one. 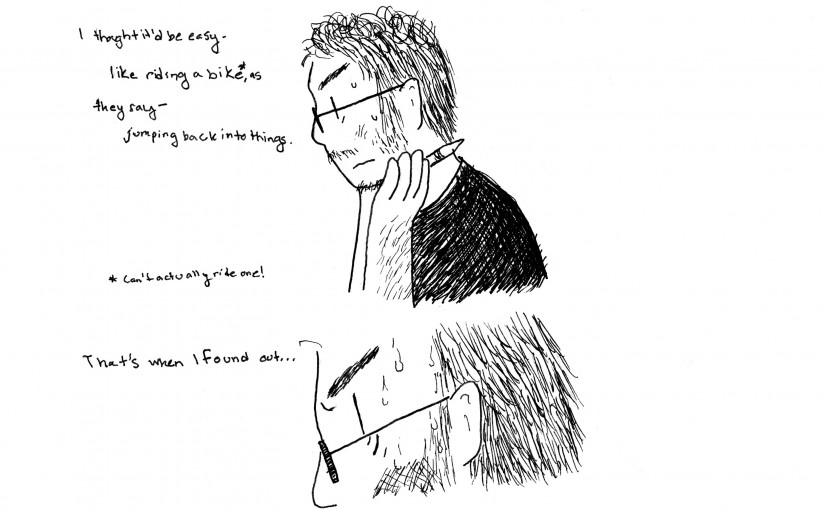 I have to say, it’s great that I’ve finally gotten back into the drawing habit after literally years of avoiding it for…reasons (one of which rhymes with “fart spool”).

But damn, it’s a lot harder than I thought it would be.

I think it’s because it has been a while since I’ve just sat down and drawn anything off the top of my head.  It’s also, I think, because of that little perfectionist inside my head still saying, “It’s gotta be perfect, man.  You hear me?  Perfect.  Or else why do it?” coupled with massive amounts of self doubt (“Why am I doing this?  I suck.  People think I suck.  I should just crawl into a hole forever and die”).  You know?  Not particularly fun stuff to be thinking about while trying to draw.

For the past 4 years or so, this lethal combination became extremely overwhelming, and took over to the point where I honestly thought, “Well, this is it.  I’m never drawing again.  Wasted years of my life on a hobby that doesn’t mean squat.  Time to go cry into a Chipotle burrito about the black hole of suck that is my life.”  And that was that.  I’d just let all of my creativity get sucked dry and left to rot inside my brain, rattling around as I went on my merry, anxiety riddled way.

Now, though, I do feel like things have changed.  I don’t know, perhaps it’s being unemployed that has brought a sense of clarity to the idea of drawing.  Might as well do it, right?  Might as well do something to fill in the hours instead of just staring at a ceiling.  Yeah, the little voices are still there, poking their grubby fingers at my work and whispering “Don’t even try, you numbskull.”  And yeah, it’s hard work, trying to get back into the swing of things and producing content of any sort, putting yourself out there to be looked at.

But it’s fun hard work.  And I’m glad that I’m doing it.  I feel like I truly have found myself again, after years of just shoving it aside and honestly being afraid of it.

So, yeah.  Drawing, welcome back.  I’ve missed you.  Come sit down and have a cookie, we’ve got some catching up to do. 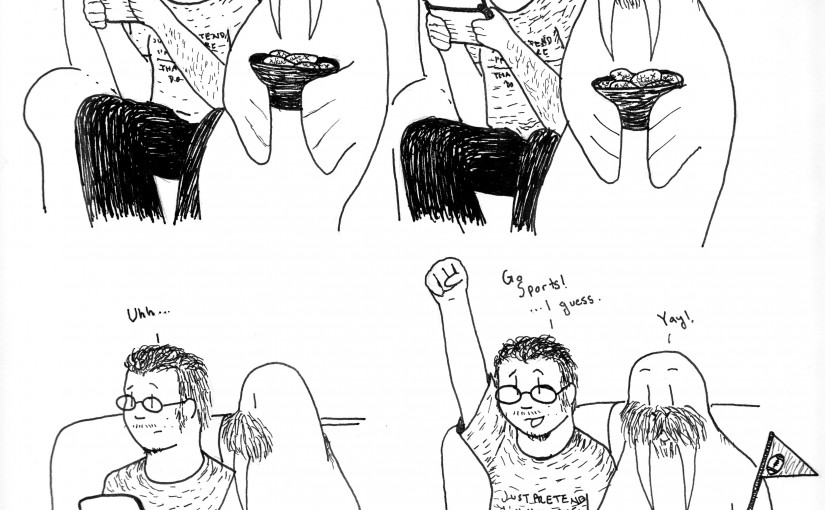 Honestly, I did forget that the Super Bowl was this weekend.  Which pretty much sums up how much I care about sports, in that I don’t.  At all.  It’s not that I don’t understand the rules, I just…don’t care.  Maybe it stems from my own lack of sportiness/athletic prowess, maybe I just think they’re honestly kind of boring and would rather be doing something else with my time, I don’t know.  All I know is that there is a certain amount of apathy when it comes to all things sporty.

Back in high school and college, I went to exactly one game per season, and that was solely to watch my brother march in the marching band.  I would spend most of the game huddled up on the bench with my iPod on, waiting for the right moment to start whining to go home (usually some point during the third quarter).  Now, I have mastered the polite, interested nod whenever someone starts talking about sports, while simultaneously zoning out. 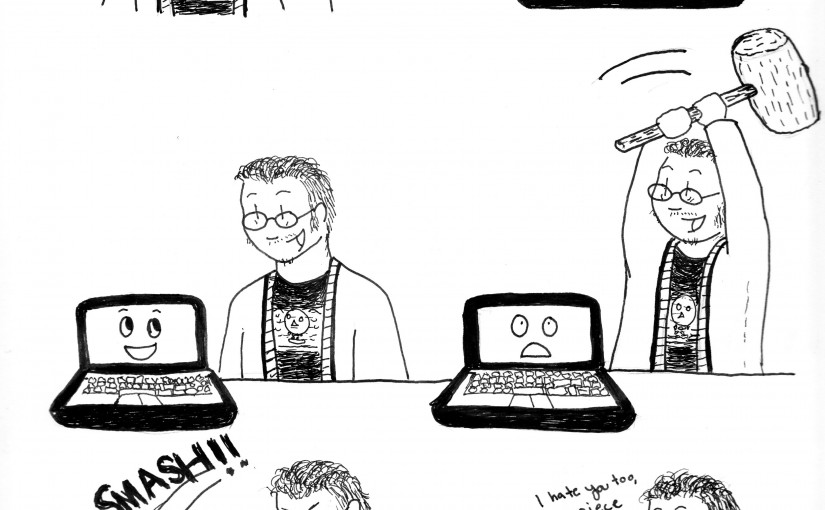 You know, if the singularity ever does actually happen, and computers rise up to destroy us all, this could possibly be the best solution for it.

Or maybe technology just hates me.  That could also be it. 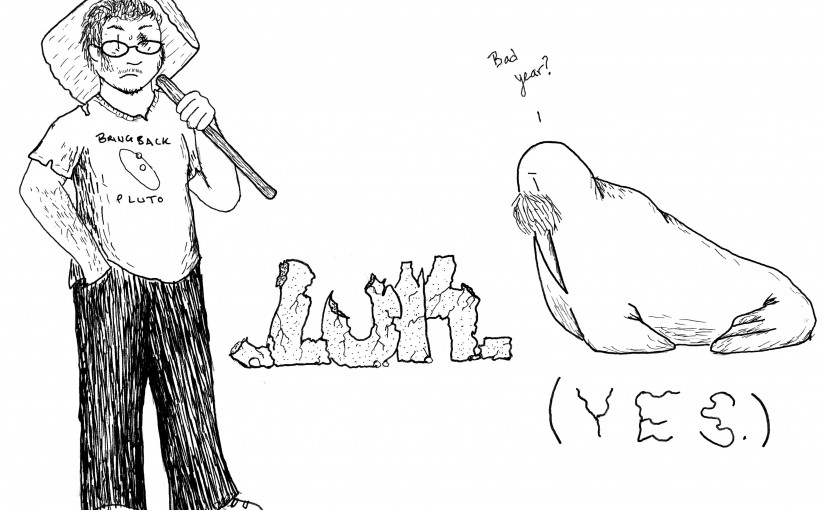 Very rarely do I look back on a year and think, “God, that year sucked.”

It started in January, just after Winter Break.  I got back to college and was all set to start my last semester, when my body decided to start rebel.  It was just these random chest and stomach pains, coupled with some awful reflux that really screwed with my head.  I started to have these horrible insomniac moments where I couldn’t sleep at all, and became a Web MD addict, convincing myself I had everything from Angina to Stomach Cancer, and that I would die in my sleep (no joke).  I came super close to actually calling 911 in the midst of what I thought was a heart attack (in reality a panic attack).  And this literally lasted all year, steamrolling into moments of anxiety and extreme self doubt about pretty much everything, especially after graduation: what I was going to do with my life, when I was going to die, would I become this big fat loser forever, etc.  Really morbid stuff.

So, between all of this crippling anxiety, a massive existential crisis, bouts of depression and insomnia, general unemployment, lack of motivation to do pretty much anything, and a myriad of health issues, 2014 blew.  I mean, really, it felt like one thing after another after another after ANOTHER – just, blargh, you know?  Blargh.  BLAAAAAARGH.

Granted, there were some good things – I graduated from college, finally got my driver’s license, and got to travel a bit (Atlanta!  Boston!) – but overall, yeah, not fun.  Not fun AT ALL.  When New Year’s Eve rolled around – hell, when frickin’ Thanksgiving rolled around – I was ecstatic to know that this year was coming to a swift end, and something brand spanking new was around the corner. 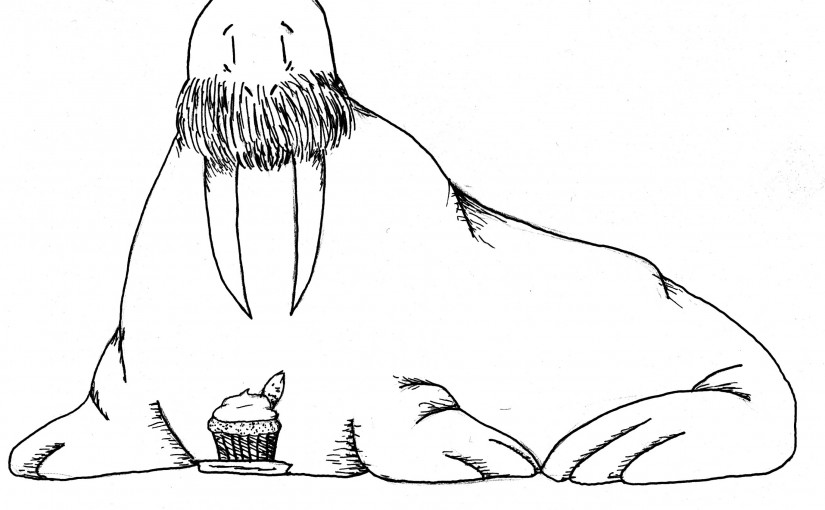 Thought I’d start things off on a good, solid, walrus-y note.  After all, it’s right there in the website name.  And just look at this guy – he’s welcoming you here with a cupcake!  Granted, it’s fish flavored, but still, it’s the thought that counts, right?  (Feel free to click on him to see him in his full, whiskery glory).

So, suppose I should introduce myself, all nice and proper.  Hi.  I’m Drew.  And welcome to my blog/webcomic/comic diary…thing, I Draw Walruses.  Here, there shall be cartoons and drawings galore not just about walruses – but there shall be plenty of those, trust me – but daily slice of life stuff about my life and whatever really happens to pop into my head at the time.

I’ve been thinking about doing this for a while, really, starting a blog and all.  The trouble was trying to find something to blog about.  Originally, this was supposed to be a food blog of some kind because I do enjoy baking and being in the kitchen a great deal, but…I don’t know, I sort of just chickened out, I guess.  Plus, I really wasn’t in the right headspace to be starting a blog in the first place, having just graduated college and being stuck in that horribly depressive state of being unemployed and attempting to transition into adulthood gracefully.  Trust me when I say it was bad times all around.

Recently, though, I thought I’d give it another go, only this time in a completely different direction.  And then it occurred to me – why not draw?  I love to do it – granted it had been a good long time since I’d sat down to just draw (3, 4 years, give or take – thanks a heap, art school).  And why not include walruses, which I’ve been drawing for about a decade now and have sort of adopted as my trademark(long story)?  So, I sat down, broke out the Microns and a sketchbook, and here we are, with I Draw Walruses.

I’m a bit nervous to be starting this project – this being the Internet and all – but at the same time, super excited.  Feels like I’m kind of putting myself out there for the first time.  Let’s see what happens.

So, in short: I’m Drew.  I like drawing cartoons.  Welcome to I Draw Walruses.